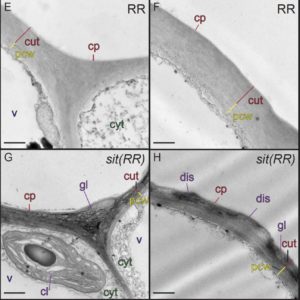 The waxy cuticle, a key barrier to desiccation and pathogen entry, is a dynamic structure, the composition, area, permeability and thickness of which can change in response to environmental conditions.  For example, water deficit in Arabidopsis (Arabidopsis thaliana) triggers an increase in the accumulation of both cutin monomers and waxes, resulting in a thicker, less permeable cuticle. While the abiotic stress-related hormone abscisic acid (ABA) is known to up-regulate wax accumulation in response to drought, the hormonal regulation of cuticle biosynthesis during organ ontogeny is poorly understood. To address the hypothesis that ABA also mediates cuticle formation during normal shoot ontogeny, Martin et al. (10.1104/pp.17.00387) assessed the effect of ABA deficiency on cuticle formation in three ABA biosynthesis-impaired tomato (Solanum lycopersicum) mutants: notabilis, flacca, and sitiens. The severity of the phenotypes of these mutants correlates with the ABA concentrations in their shoots: notabilis had the mildest phenotype and the highest level of ABA, while sitiens had the most severe phenotype and the lowest ABA levels. The mutant leaf cuticles were thinner, had structural abnormalities, and had a substantial reduction in levels of cutin. The exogenous application of ABA partially rescued these phenotypes, confirming that they were a consequence of reduced ABA levels. The ABA mutants also showed reduced expression of genes involved in cutin or wax formation. This difference was again countered by exogenous ABA, further indicating regulation of cuticle biosynthesis by ABA. Fruit cuticles were less affected by the ABA-associated mutations, suggesting that ABA action influences cuticle formation in an organ-dependent manner. These results suggest dual roles for ABA in regulating leaf cuticle formation: one that is fundamentally associated with leaf expansion, independent of abiotic stress, and another that is drought induced. 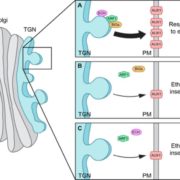 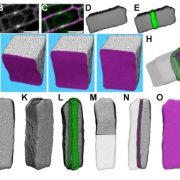 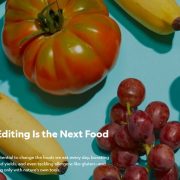 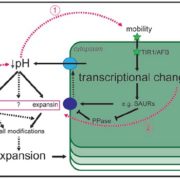 Is All Root Hair Development the Same?
Scroll to top