Koskela and Brünje et al. identified a chloroplast protein acetyltransferase, which is required for the regulation of light harvesting in Arabidopsis. Plant Cell (2018) https://doi.org/10.1105/tpc.18.00155. 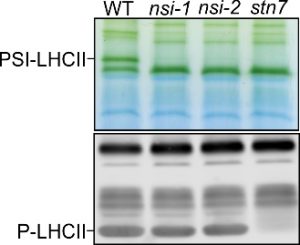 nsi knock-out mutants are unable to form the PSI-LHCII complex, even though LHCII is phosphorylated normally (P-LHCII).

Background: Plants harvest the energy of sunlight through photosynthesis and thereby enable all aerobic life on Earth. A complex photosynthetic machinery, made of proteins and pigments, is responsible for the light harvesting and converts light energy into important building blocks of the cell. The composition of the photosystems, and thus photosynthetic activity, is regulated depending on the available sunlight. This regulation is partly mediated by the transient phosphorylation of specific photosynthetic proteins. Other chemical modifications of photosynthetic proteins have been reported as well, such as the acetylation of lysine residues. However, little is known about their function and their role in photosynthesis.

Question: We wanted to identify a lysine acetyltransferase that regulates the acetylation level of photosynthesis-related proteins and to investigate its biological function.

Findings: We found out that the Arabidopsis acyltransferase NSI is responsible for decorating chloroplast proteins with an acetyl moiety. By studying lysine acetylation changes in nsi knockout plants, we identified several chloroplast proteins as NSI targets. Many of these proteins are involved in photosynthetic reactions. Our analysis revealed that the mutant plants were not able to balance the amount of light energy received by the two photosystems, photosystem I (PSI) and PSII, in response to changes in illumination. Normally, this process is mediated by the phosphorylation of the light-harvesting antenna (LHCII), which interacts with PSI in its phosphorylated form. However, PSI and LHCII failed to interact in nsi mutants even though LHCII was phosphorylated like in wild-type plants. Our results suggest that acetyltransferase NSI is required for the light-dependent LHCII antenna reorganization, known as state transitions, independently of phosphorylation.

Next steps: Several interesting target proteins have been identified to be acetylated by NSI. However, the exact mechanism how this acetyltransferase mediates its effect on state transitions remains an open question. In the future, it will be crucial to establish whether lysine acetylation affects the interaction of LHCII with the photosystems directly or whether NSI controls some other process that is required for antenna reorganization. 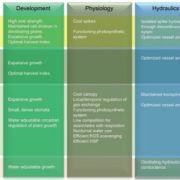 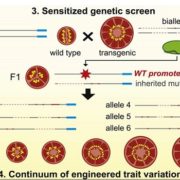 The role of the seventh subfamily of cytoplasmic receptor kinases in plant immunity...