Background: In multicellular organisms, most cells contain the same genetic information. However, the genes that are active or inactive differ among cells of different tissues, organs, etc. The mechanisms responsible for such differential gene activity include so-called epigenetic mechanisms such as the chemical modification of DNA or histones, the proteins that package DNA. For example, most of the genes responsible for the making of a flower remain silent during vegetative growth, when the plant makes leaves as the only lateral organ. Some of the genes responsible for flowering and making the flower are epigenetically repressed in Arabidopsis. More than one hundred components of the epigenetic machinery are known in this plant species.

Question: We wanted to know if the previously uncharacterized INCURVATA11 (ICU11) gene of Arabidopsis encodes a component of the epigenetic machinery. The icu11-1 mutants have curly leaves and flower early, phenotypes typical of some genes encoding proteins with epigenetic functions; this observation prompted us to identify the ICU11 gene and study its action and interactions.

Findings: We found that the Arabidopsis ICU11 gene encodes a protein of unknown function, which belongs to a large superfamily of oxidative enzymes. ICU11 belongs to a five-member gene family, which we named the CUPULIFORMIS (CP) family. Although the cp2, cp3, cp4 and cp5 single mutants were indistinguishable from wild-type plants, the icu11 cp2 double mutants were lethal: icu11 cp2 seeds skipped the vegetative phase of the life cycle, flowered immediately after germination, and died. Hundreds of genes that were normally repressed were activated in icu11 and icu11 cp2 plants. In these plants, the chemical modifications of the histones, but not of the DNA, were perturbed. We found that the ICU11 and CP2 proteins localize to the nucleus and concluded that they are novel components of the epigenetic machinery.

Next steps: We aim to shed light on the molecular mechanism of the epigenetic activity of ICU11 and CP2, including the nature of their redundant functions. We will screen for physical interactors of ICU11 and CP2 as well as for the genetic interactors of icu11 alleles. In addition, we will study the functions of the CP3, CP4, and CP5 genes. 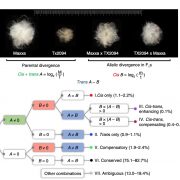