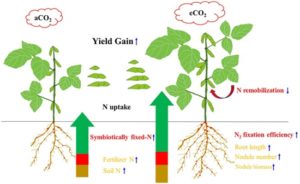 Climate change is certain to affect our ability to produce food crops and feed a growing global population in the twenty-first century.  Free-air CO2 enrichment (FACE) experiments have shown that elevated CO2 (eCO2) levels, a major driver of climate change, have a consistently positive effect on the yield of the world’s most important crops, such as rice, wheat and soybean.  However, under such conditions, nitrogen deficiency can become a limiting factor for plant productivity.  Here, Li et al. explored nitrogen uptake mechanisms in eight soybean cultivars under eCO2.  These cultivars varied in their response to eCO2, with seed yield increases ranging from 12 – 91%.  Increased yield correlated with enhanced nitrogen uptake, primarily through symbiotic fixation, as well as a reduction in nitrogen remobilization from shoots to seeds during reproduction.  This reduction in remobilization did not limit the seed nitrogen content.  Specific interactions with the soil microbiome are likely to explain the observed differences between cultivars in increased nitrogen fixation and crop yield under eCO2.  Research such as this will be essential to help achieve food security in a changing climate. (Summary by Mike T. Page) Front. Plant Sci. 10.3389/fpls.2017.01546. 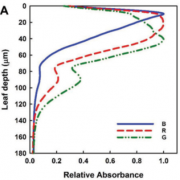