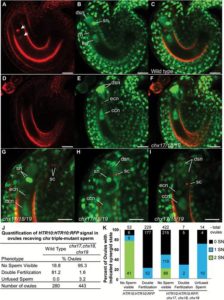 Cells have developed different mechanisms including control of ion and pH homeostasis to adapt to their constantly changing environment. Such adaption is accomplished by different ion transporters at the membranes. AtCHX17, AtCHX18 and AtCHX20 are members of the cation-H+ exchanger (CHX) family, which in Arabidopsis is formed by 28 members. Padmanaban et al. studied their function in planta. Previous studies showed the role of CHXs in K+ modulation and pH homeostasis by complementation of yeast mutants. The triple mutant chx17chx18chx19 showed decreased seed production and reciprocal crosses showed a pronounced male defect. Further analysis of the pods showed that there was pollen tube formation but fertilization did not occur. Moreover, live imaging of ovules pollinated with the chx triple mutant showed that only the egg or the central cell was fertilized but not both. Therefore loss of the CHX17, CHX18, and CHX19 genes lead to unsuccessful double fertilization. Scanning electron micrographs also revealed a disorganized pollen wall in the chx triple mutants compared to the wild type. The study shows the importance of the cation transporters during pollen development and sperm function.  (Summary by Cecilia Vasquez-Robinet) J. Exp Bot. 10.1093/jxb/erw483 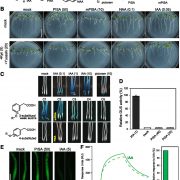 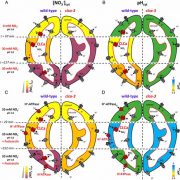 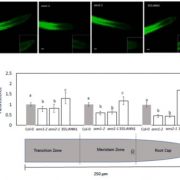 An acidophilic green algal genome provides insights into adaptation to an acidic...