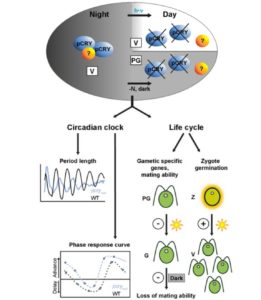 Cryptochromes are flavin-binding proteins that act as blue light receptors in bacteria, fungi, plants and insects and are components of the circadian oscillator in mammals. Animal and plant cryptochromes are evolutionarily divergent, although the unicellular alga Chlamydomonas reinhardtii has both an animal-like cryptochrome and a plant cryptochrome (pCRY; formerly CPH1). Müller et al. (10.​1104/​pp.​17.​00349 ) present a functional characterization of pCRY based on an insertional mutant that expresses only 11% of the wild-type pCRY level. The pcry mutant is defective for central properties of the circadian clock. In the mutant, the period is significantly lengthened, ultimately resulting in arrhythmicity, while blue light-based phase shifts show large deviations from what is observed in wild-type cells. Gamete formation by vegetative Chlamydomonas cells is known to mainly triggered by blue light. Thus, it is of interest that pCRY is also involved in gametogenesis in Chlamydomonas. pCRY is down-regulated in pregametes and gametes and in the pcry mutant there is altered transcript accumulation under blue light of the strictly light-dependent, gamete-specific gene GAS28. pCRY acts as a negative regulator for the induction of mating ability in the light and for the loss of mating ability in the dark (during which it accumulates). Moreover, pCRY is necessary for light-dependent germination, during which the zygote undergoes meiosis that gives rise to four vegetative cells. In summary, pCRY is a key blue light receptor in Chlamydomonas that is involved in both circadian timing and life cycle progression. 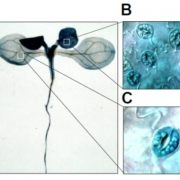 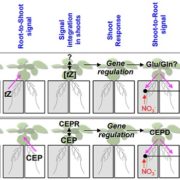 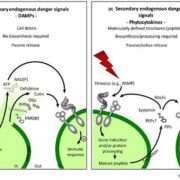 A Controller of Leaf Angle in Soybean