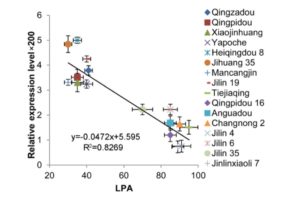 Soybean (Glycine max) is one of the most important oilseed crops that provides edible oil for humans and is a major renewable feedstock for biodiesel production around the world. As such, increasing soybean yield potential has become a long-term breeding objective. Soybean leaf petiole angle is an important plant architectural trait that affects canopy coverage, photosynthetic efficiency, and ultimately productivity in many legume crops. Leaf petiole angle is mainly controlled by the structure of the pulvinus at the base of a leaf petiole, leaf, or leaflet. Typically, a pulvinus consists of a core of vascular tissues surrounded by a flexible, bulky cylinder of thin-walled parenchyma cells. The outer cells of the parenchyma, termed the motor cells, are responsible for nyctinastic and thigmonastic movement through water-driven volume changes. Gao et al. (10.​1104/​pp.​16.​00074 ) report the identification, isolation, and functional characterization of Glycine max Increased Leaf Petiole Angle 1 (GmILPA1), a gene encoding an APC8-like protein, that is a subunit of the anaphase-promoting complex/cyclosome (APC/C) in soybean. A deletion of a fragment involving the 4th exon of GmILPA1 leads to enlarged leaf petiole angles that are associated with reduced motor cell proliferation in the Gmilpa1 mutant. GmILPA1 is mainly expressed in the basal cells of leaf primordia and appears to function by promoting cell growth and division of the pulvinus. GmILPA1 exhibits variable expression levels among varieties with different degrees of leaf petiole angles, and expression levels are correlated with the degrees of the leaf petiole angles. Together, these observations reveal a genetic mechanism modulating plant petiole angle that could pave the way for modifying soybean plant architecture with optimized petiole angles for enhanced yield potential.