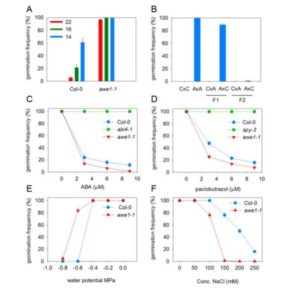 Environmental signals during seed production are important determinants of seed properties, including seed dormancy and seed longevity. The mother plant plays an important role in this signaling process, collecting signals throughout her life history and modulating dormancy by providing hormones to maturing seeds and by plastic development of the tissues surrounding the embryo. This process is especially important in seeds with physiological dormancy that is coat imposed, which requires the presence and activity of the seed coat and endosperm structures that form a barrier between the embryo and the external environment. In order to further understand the mechanisms by which the control of coat-induced dormancy takes place in Arabidopsis (Arabidopsis thaliana), Fedi et al. (10.​1104/​pp.​16.​01556 ) conducted a forward genetic screen to isolate mutants that fail to enter dormancy in response to variation in temperature during seed set. They show that in one of these mutants, designated awake1, the maternal allele is required for entry into strongly dormant states. awake1 mutants show seed phenotypes shown previously to be associated with the loss of suberin in the seed. The authors identify awake1 as an allele of ABCG20, an ATP-binding cassette transporter-encoding gene required for the transport of fatty acids during suberin deposition, and show that further suberin-deficient mutants have seed dormancy defects. It has been previously been established that the suberin composition of seed coats is affected by temperature during seed maturation, but this response appears to be independent of ABCG20. The authors conclude that seed coat suberin is essential for seed dormancy imposition by low temperature and that the exclusion of oxygen and water from the seed by the suberin and tannin layers is important for dormancy imposition.