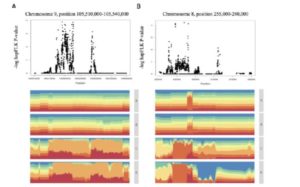 Teosinte, the ancestor of maize, grows in a range of environments in México. Teosinte parviglumis (Zea mays ssp parviglumis) is more prevalent in lowland regions while teosinte mexicana (Zea mays ssp mexicana) occupies highland territory (>2000 m above sea level). Admixture between parviglumis and mexicana can occur at mid-elevations. Fustier et al. sampled an altitudinal gradient of teosinte populations and then used pooled sequencing populations of low, mid and high elevations. The authors used two population differentiation methods and correlations of allele frequencies with environmental variables to find outlier SNPs that tended to cluster together and 47 candidate regions were identified. The authors were able to recover a previously characterized inversion in chromosome 1. A soft sweep was found in a locus involved in leaf macrohair variation, a phenotype that is characteristic of teosinte mexicana and that is absent in lowland teosinte parviglumis. Finally, several outlier SNPs tthat colocalized with loci involved in root system architecture, heavy metal tolerance and nutrient deficiencies point to a significant role of soil physico-chemical properties as major drivers of teosinte local adaptation. (Summary by Rubén Rellán-Álverez group) Mol. Ecol. 10.1111/mec.14082 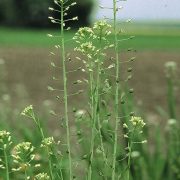 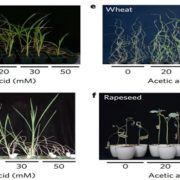