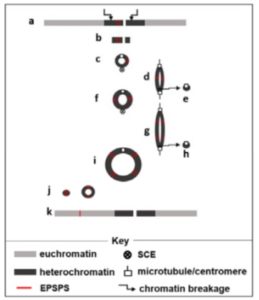 The herbicide glyphosate is widely used in agriculture, especially on glyphosate-resistant (GR) transgenic crops. The widespread adoption of GR crops across the globe and an overreliance on glyphosate as a single means of weed control has spawned many GR weed species. Glyphosate inhibits the 5-enopyruvlyshikimate-3-phosphate synthase (EPSPS) enzyme of the shikimate pathway, resulting in a reduction of aromatic amino acid synthesis and, eventually, plant death. Recently, the research group of Koo et al. (10.1104/pp.17.01668) reported that the EPSPS gene in glyphosate-resistant waterhemp (Amaranthus tuberculatus) was amplified at the native locus and, surprisingly, on an extra chromosome. Molecular marker analysis showed that the extra chromosome originated from the autosomes; however, little else could be ascertained concerning the extra chromosome because it was only analyzed in mitotic preparations in which the chromosomes were highly condensed. Here, the authors report that the extra chromosome is, in fact, a ring chromosome which they have named “extra circular chromosome carrying amplified EPSPS (ECCAE).” ECCAE is heterochromatic, harbors four major EPSPS amplified foci, and is sexually transmitted to 35% of the progeny. Two highly glyphosate resistant (HGR) A. tuberculatus plants bearing ECCAE displayed somatic cell heterogeneity. Some cells had secondary ECCAEs, which displayed size polymorphisms and produced novel chromosomal variants with multiple gene amplification foci. This is the first report of early events in aneuploidy-triggered de novo chromosome integration by an as yet unknown mechanism, which may drive rapid adaptive evolution of herbicide resistance in common waterhemp.