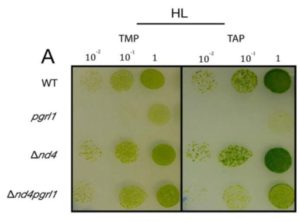 Photosynthetic eukaryotic organisms rely on two organelles, chloroplasts and mitochondria, for the synthesis of the molecules NAD(P)H and ATP that fuel their metabolism. These two organelles are commonly thought of as two separate entities but the results of Larosa et al. (10.1104/pp.17.01249) suggest the extent of communication between these two organelles may be underappreciated. The authors have investigated the mutual influence of respiratory and photosynthetic activities by analyzing Chlamydomonas reinhardtii mutants. C. reinhardtii cells depleted of the nuclear-encoded chloroplast protein PGRL1, which is part of a ferredoxin:plastoquinone oxidoreductase involved in cyclic electron flow and hence the maintenance of ATP (but not NADPH), are strongly susceptible to photodamage. Mutations in the mitochondrial complex I gene ND4, on the other hand, lead to a near complete loss of complex I activity. Surprisingly, the strong photosensitivity of Chlamydomonas reinhardtii cells depleted of the chloroplast protein PGRL1 was rescued by the introduction of a mitochondrial mutation affecting respiratory complex I. Functional analysis showed that such a reduced respiratory activity influenced chloroplast electron transport with a consequent overreduction of plastoquinone and donor-side limitation of photosystem I (PSI). As a consequence, damage due to excess light affected photosystem II (PSII) more than PSI. Double mutant nd4/pgrl1 cells are able to grow under excess illumination, while single pgrl1 are not, thanks to the presence of an efficient repair mechanism of PSII.