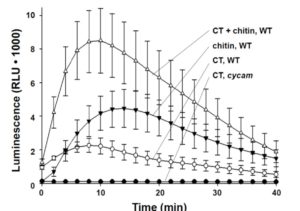 The root-colonizing endophytic fungus Piriformospora indica, which was originally isolated from the rhizosphere of two woody shrubs in the Indian Thar Desert, colonizes the roots of a broad host range, including the model plant Arabidopsis. P. indica does not cause pathogenic symptoms, but promotes root and shoot biomass production, induces early flowering and enhances the plant’s resistance to various biotic and abiotic stresses. Fungal cell wall extracts of P. indica induce an increase in cytoplasmic calcium ([Ca2+]cyt) in host plant roots within 90 secs of application. Johnson et al. (10.1104/pp.17.01423) now demonstrate that the active compound from P. indica is cellotriose (CT), and that CT induces a mild defense-like response, including the production of reactive oxygen species, changes in membrane potential and the expression of genes involved in growth regulation and root development. The authors identified a chemically induced mutant impaired in its response to CT and various other cellooligomers, but not to chitooligomers, in roots. The mutant contains a single nucleotide exchange in the gene encoding a poly(A) ribonuclease (AtPARN) that degrades the poly(A) tails of specific mRNAs. The wild-type PARN cDNA, expressed under the control of a 35S promoter, complements the mutant phenotype. The identification of cellotriose as a novel chemical mediator sheds light on the signal transduction mechanisms underlying the mutualistic relationship between P. indica and plants.