Photosynthetic organisms can be found across most environments on Earth, including the most extreme ones. The McMurdo Valleys in Antarctica are among the driest and coldest places on the planet, and lakes in this region are permanently covered by 5 m of ice (Priscu et al., 1998). Lake Bonney, one of the McMurdo lakes, is home to a single-cell algal species, Chlamydomonas sp. UWO 241, which can withstand low temperatures, salinity levels exceeding those of seawater, and low light availability caused by the permanent ice coverage. The photosynthetic machinery of this organism is unique: it does not undergo state transitions (Morgan-Kiss et al., 2002), which usually adjust the distribution of light absorption between photosystem I (PSI) and photosystem II (PSII) (Fig. 1). 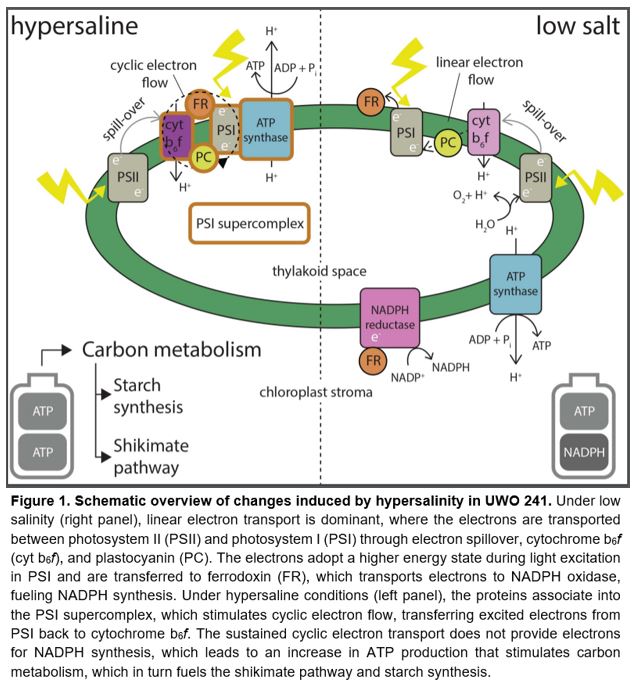 In linear electron transport, the electrons extracted from a water molecule are transferred from PSII through plastoquinone, the cytochrome b6f complex, and plastocyanin to PSI. At PSI, the electrons are again brought into a higher energetic status and transferred through ferrodoxin to NADP reductase. The output of linear electron transport is the production of NADPH, as well as ATP generation driven by the proton gradient within the thylakoid space (Fig. 1). By contrast, in cyclic electron flow, ferrodoxin transports the electrons from PSI back to the cytochrome b6f complex, perpetuating the generation of the proton gradient at the expense of NADPH production (Fig. 1). Cyclic electron transport is associated with photoprotection caused by stromal over-reduction (Yamori and Shikanai, 2016).  The  Antarctic alga UWO 241 shows high PSI-mediated cyclic electron transport (Morgan-Kiss et al., 2002), which is sustained under hypersaline conditions (Szyszka-Mroz et al., 2019). The sustained cyclic electron flow in UWO 241 is associated with the formation of a cytochrome b6f-PSI supercomplex (Szyszka-Mroz et al., 2015). However, it is unknown whether this constant cyclic electron flow underlies adaptation to the extreme environment in which it is found.

In the current issue of Plant Physiology, Kalra (et al., 2020) deploy metabolomics and  proteomics approaches to examine whether the formation of the cytochrome b6f-PSI supercomplex, induced by hypersalinity, leads to changes in carbon metabolism, thereby contributing to long-term stress adaptation. The group validated that exposure to hypersalinity causes a shift from free PSI, dominant under low salt conditions, to PSI associated with the supercomplex (Kalra et al., 2020). Improved isolation of the PSI supercomplex allowed a more precise determination of its integral components, including PSI reaction center subunits, calcium-sensing receptor, and ATP synthase subunits (Fig. 1) (Kalra et al., 2020). Cultures that were grown under hypersalinity accumulated more glycerol and compatible solutes compared to cultures grown under low salinity (Kalra et al., 2020). Additionally, the components of starch synthesis and the shikimate pathway were more abundant under hypersalinity. Therefore, the sustained cyclic electron flow in UWO 241 does lead to altered carbon metabolism, resulting in more robust carbon capture into the shikimate pathway and Calvin-Benson cycle, sustaining the growth and osmotic adjustment in extreme conditions.

Cyclic electron transport was previously associated with drought tolerance in resurrection plants (Huang et al., 2012) as well as adaptations to high temperatures (Jin et al., 2009), and could be an interesting new target for environmental stress resilience in vascular plants.  Although state transitions between linear electron flow and cyclic electron flow were thus far considered a short-term adaptation (Minagawa, 2011), the study by Kalra et al. (2020) suggests that sustained cyclic electron flow in UWO 241 serves as a long-term adaptation to hypersalinity, providing high ATP levels, which presumably enhance stress tolerance. However, what works for extremophiles like UWO 241 might not necessarily work for crop species. Most extremophiles lead a frugal life cycle, associated with slow growth rates, which are undesirable in the agricultural context. Therefore, before applying this approach to improve crop stress tolerance, the relationship between cyclic electron flow and growth maintenance under stress should be examined more closely in vascular plants. 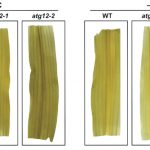 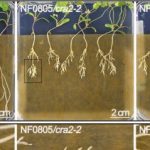 Peptide-Receptor Signaling Pumps the Brakes on Auxin Biosynthesis and Ethylene...
Scroll to top