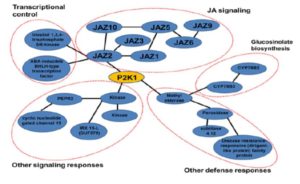 Damage-associated molecular patterns (DAMPs) are endogenous chemicals that are released from damaged cells and which play a role as “danger signals.”  Adenosine 5’-triphosphate (ATP) becomes a DAMP signal after release into the extracellular milieu following cellular damage. Extracellular ATP is recognized at the cell surface by purinoceptors, where it evokes immune responses and wound healing. The ATP-insensitive mutant, dorn1 (does not respond to nucleotide 1) locus encodes a plant purinoceptor, referred to as P2K1 (K is for kinase), which, unlike the purinoceptors in animal systems, is a lectin-receptor serine/threonine kinase. It remains largely unknown, however, how extracellular ATP induces plant defense responses. Tripathi et al. (10.1104/pp.17.01477) report that ATP treatment enhanced resistance against infection by the necrotrophic fungus, Botrytis cinerea, a major cause of pre- and post-harvest diseases in numerous crops. The induced resistance was enhanced in an P2K1 receptor overexpression line, but reduced in the receptor mutant, dorn1-3. A search of the public database revealed a set of genes induced through both ATP and JA. In addition, ATP induced the degradation of jasmonate ZIM-domain (JAZ) proteins, which play key roles as repressors of JA signaling. The reduction in JAZ proteins required intracellular signaling via second messengers, cytosolic calcium, reactive oxygen species, and nitric oxide. Interestingly, the ATP-induced JAZ1 degradation was attenuated in the JA receptor mutant, coi1, but not in the JA biosynthesis mutant, aos, or upon addition of JA biosynthesis inhibitors. Immunoprecipitation analysis demonstrated that ATP increases the interaction between COI1 and JAZ1, suggesting direct crosstalk between extracellular ATP and JA in intracellular signaling events. Taken together, these results suggest that extracellular ATP signaling directly impacts the JA signaling pathway to maximize plant defense responses. 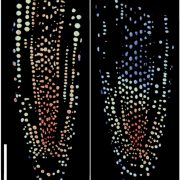 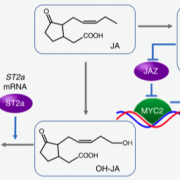 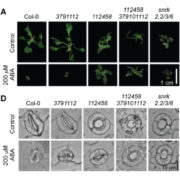 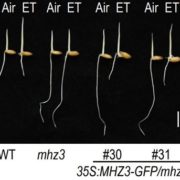 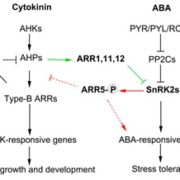 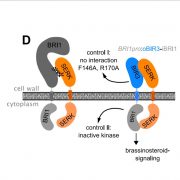 Origin and Role of ABA in Stomatal Regulation
Scroll to top