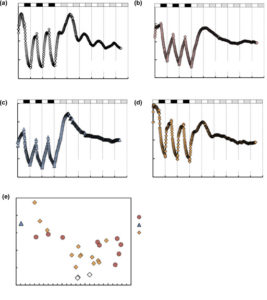 Clocks in green algae have been described as simple two-gene loops, while clocks in angiosperms have evolved to complex interlocked loops. This striking jump in complexity led Linde et al. to investigate the clocks in bryophytes and charophytes to shed light on this transition. First, through the sequence analysis of bryophyte’s and charophyte’s available genomes, the authors identified several homologues to the Arabidopsis clock genes, with some differences in copy number (duplication and loss) and presence. Then, they characterized the rhythmicity and functionality of such genes in mutants of the liverwort Marchantia polymorpha, as well as expression patterns in the former and the hornwort Anthoceros agrestis. Although we still don’t know what processes these clock genes control in bryophytes and charophytes, the results suggest an early occurrence of a complex circadian network that was present before or concurrent with the colonization of land by plants. (Summary by Gaby Auge) New Phytol. doi: 10.1111/nph.14487

Toward Designing Tulips for a Warmer World
Scroll to top