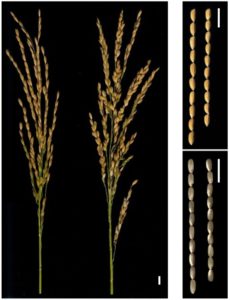 The trade-off between grain size and number has been traditionally hard to break.  Bai et al established that differences in panicle architecture between two rice cultivars resulted from duplication of a long-distance silencer of the FRIZZY PANICLE (FZP) gene in one cultivar (Chuan 7).  Increased silencing of FZP led to a longer panicle branching period and grain yield increases of at least 15% in Chuan 7.  This was due to a large increase in the number of spikelets per panicle, with only a slight reduction in grain weight.  Further molecular characterisation revealed that OsBZR1 binds to the silencer sequence to repress FZP transcription.  Full FZP knock-outs are not viable, but fine-tuning of FZP expression appears able to enhance rice yields by optimization of the grain size/number trade-off. (Summary by Mike Page) Nature Plants 10.1038/s41477-017-0042-4

Repression of photomorphogenesis by a small cell-wall-derived dark signal (...
Scroll to top