Cyclins and cyclin-dependent protein kinases (CDKs) are critical regulators of cell cycle progression. Although CDK1 is essential for mitosis in animals and fungi, CDKA, the plant and algal ortholog of CDK1, is not essential for cell division in Arabidopsis (Nowack et al., 2012). By contrast, CDKB is a plant-specific CDK. The high level of whole-genome duplication in land plants created evolutionary opportunities for novel regulatory functions to arise, but it poses a serious challenge for genetic analysis due to widespread redundancy.

The alga Chlamydomonas reinhardtii (Chlamydomonas) has numerous advantages that simplify genetic analysis. Because algae and land plants diverged prior to the whole-genome duplications in land plants, most Chlamydomonas genes are single-copy. Chlamydomonas grows as a haploid, so mutant phenotypes are readily apparent, and numerous temperature-sensitive mutants in a variety of cell cycle components are available. Cultured cells can grow continuously either photoautotrophically or heterotrophically and can be synchronized for cell cycle studies.

Chlamydomonas cultures have a long G1 growth period preceding mitosis in which cells can grow ten-fold in size without DNA replication or cell division. They then rapidly undergo multiple cycles of DNA replication, nuclear division, and cytokinesis. Many temperature-sensitive mutations in cell cycle genes, including CDKA and CDKB, cause arrest at specific points in the cell cycle (Tulin and Cross, 2015). Whereas the cdka1-1 mutant showed delayed cell cycle entry but was ultimately viable, the cdkb1-1 mutant carried out DNA replication but not mitotic entry.

Using a topoisomerase II temperature-sensitive mutation (div19-2) that results in lethality upon entry into cell division, Atkins and Cross (2018) have devised an elegant “death delay” screen to isolate new mutations in genes required for cell cycle initiation. In a div19-2 background, they discovered mutations that delay cell cycle progression by selecting for mutants showing delayed topoisomerase II-induced mortality. They discovered null mutations in both CDKA and cyclin A and show that, although neither protein is essential for mitosis in Chlamydomonas (unlike in animals and fungi), they are required mainly for appropriate timing of entry into the cell division cycle. 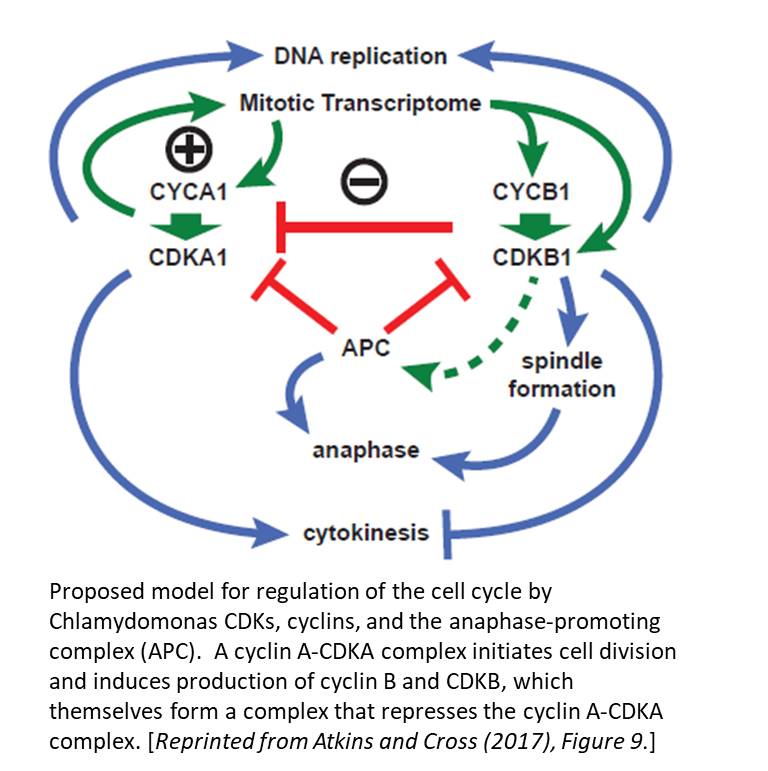 By contrast, temperature-sensitive mutants in both CDKB and cyclin B failed to enter mitosis even though they were competent for DNA replication. They appear to negatively regulate the formation of functional CDKA-cyclin A complexes, suggesting pairing of CDKA with cyclin A and CDKB with cyclin B. CDKB was absent during the extended growth period but became abundant in nuclei as cell division commenced and was degraded following cell division. Kinase activity of both CDKA and CDKB peaked during cell division.

Mutational analysis revealed that kinase activity of CDKA was dependent on cyclin A and that CDKB kinase activity was dependent on cyclin B. These biochemical results mirrored the genetic results described above. This research also clarified the role of the anaphase-promoting complex (APC), which appears to be conserved in Chlamydomonas compared to animals and fungi.

They conclude with a compelling model (see figure) in which CDKA initiates cell division and activates transcription of CDKB, which forms a complex with cyclin B. CDKB-cyclin B not only is required for spindle formation but also represses the activity of a CDKA-cyclin A complex, suggesting a negative feedback loop. 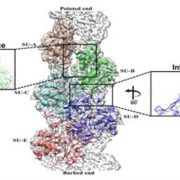 You Too Can Be On YouTube: Learn How to Create Engaging Science Communication...