Background: Grass inflorescences show extensive morphological diversity between species, due to variation in the activity and fate of lateral meristems. Lateral meristems can undergo few to many iterations of branching before terminating in a spikelet, which bears flowers that produce pollen and/or grain. Setaria viridis is an emerging model system for panicoid cereals, including economically important crops such as corn, sorghum, and sugarcane. Setaria spp. are among a small clade of grasses that form sterile branches called bristles in their inflorescences, which appear to be paired with spikelets. S. viridis spikelets produce two floral meristems, and one aborts prior to differentiation. Mutagenesis screening has identified S. viridis mutants that produced few to no bristles and apparent spikelets in place of bristles. 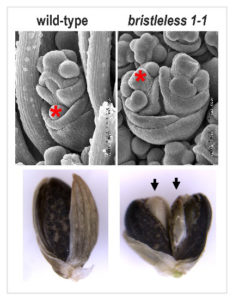 In addition to suppressing the bristle fate program in spikelet meristems, disruption of the bristleless 1 gene prevents abortion of the lower floret (red asterisk) and mutants produce two flowers per spikelet instead of one (above panels). Sometimes, both flowers produce seed (below panels).

Question: By leveraging the unique inflorescence morphology of S. viridis and previously isolated mutants, we sought to determine the genetic basis for bristle versus spikelet development. Since mutants with bristleless phenotypes were disrupted in brassinosteroid (BR) biosynthesis, we also addressed the role of BRs in this developmental decision.

Findings: We mapped the S. viridis bristleless1 (bsl1) locus, which encodes a rate-limiting enzyme in BR biosynthesis. Mutations in bsl1 result in the conversion of bristles to spikelets during inflorescence development and failure to abort the lower floret, thus producing two flowers per spikelet. These developmental defects are reproduced (phenocopied) by application of propiconazole, an inhibitor of BR biosynthesis. Using RNA in situ hybridization, we found that Bsl1 mRNAs are produced in highly localized domains adjacent to boundaries of initiating lateral organs throughout inflorescence development. Further, we showed that bristle differentiation occurs after spikelet identity markers are established, suggesting a bristle program is imposed on the default spikelet identity. We proposed a model for BR regulation of spikelet-to-bristle conversion and an analogous mechanism for lower floret abortion.

Next steps: We showed that BRs play a role in spikelet-to-bristle identity and in floral meristem persistence, two traits that can be exploited for enhanced yield potential. Next, we seek to unravel the molecular mechanism(s) by which BRs regulate these developmental processes, including comparative analyses in closely-related cereal crops. 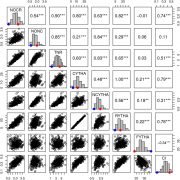 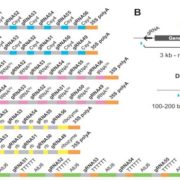