Aphids are highly destructive insect pests—in addition to robbing plants of sugar-rich phloem sap, they carry viruses that can be deadly to the plant. To reach the phloem sap, aphids must penetrate the plasma membrane of sieve elements. Mature sieve elements, which are virtually empty, translocate carbohydrates and signaling molecules, such as RNAs and soluble proteins, but also contain structural proteins of various shapes and sizes. While the functions of most of these proteins are unknown, some protect the plant from sap-sucking insects; a spindle-shaped phloem protein present in legumes expands when phloem is damaged, forming occlusions that inhibit aphid feeding (Medina-Ortega and Walker, 2015), and a phloem sap lectin in Arabidopsis thaliana limits aphid feeding (Zhang et al., 2011), possibly by interfering with digestion in the insect’s midgut (Kehr, 2006). 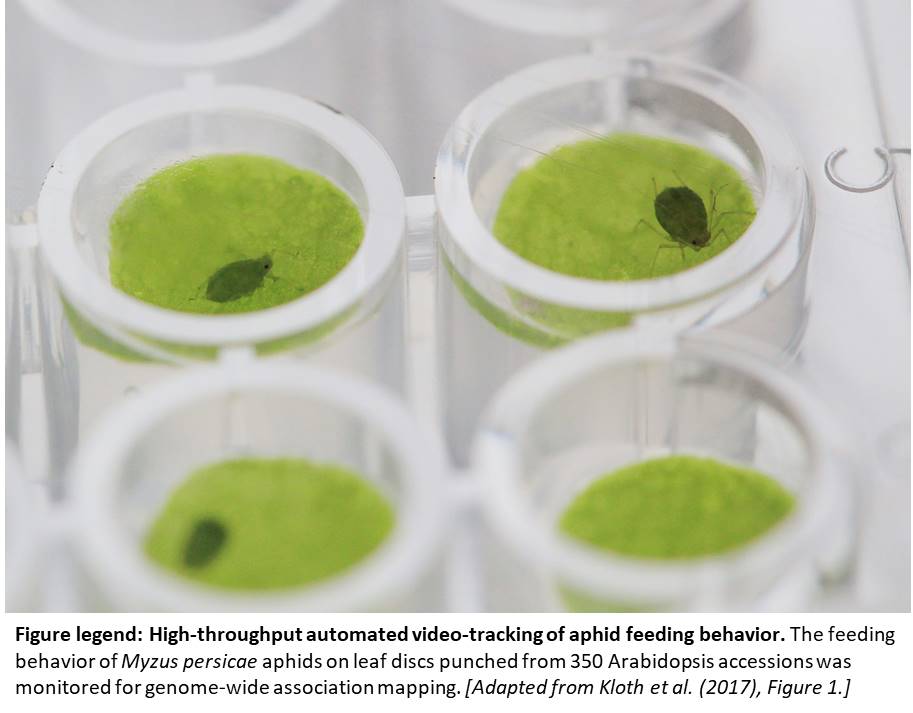 In a quest to identify novel proteins involved in aphid resistance, Kloth et al. (2017) used insect movements to mine the plant genome. They screened 350 Arabidopsis accessions for resistance to Myzus persicae (green peach aphid) using a high-throughput automated video-tracking system (see figure). By monitoring aphid body movements on a leaf disc, they could deduce how often aphids penetrated the tissue. Genome-wide association mapping revealed an association between reduced aphid probing and polymorphisms in a hsp20-like gene encoding a heat shock protein of unknown function, SIEVE ELEMENT-LINING CHAPERONE 1 (SLI1). While SLI1 expression was not affected by aphid infestation, it was expressed at higher levels in a resistant accession (Col-0) than in a susceptible one (C24). As for most heat shock-like genes, SLI1 expression increased with increasing temperature. An analysis of near-isogenic and knockout lines confirmed that SLI1 affected aphid behavior, particularly during the phloem sap ingestion phase. Furthermore, the effect on aphid feeding was more pronounced at 26°C than at 20°C, when SLI1 expression was higher.

Confocal analysis of transgenic Arabidopsis lines showed that fluorescently tagged SLI1 expressed under its native promoter localized exclusively to sieve elements. In addition to lining the margin of sieve elements, the protein colocalized with spherical bodies surrounding mitochondria, but not plastids, in the parietal phloem layer. In transgenic protoplasts, fluorescently tagged SL1 partially overlapped with the endoplasmic reticulum (ER). This localization pattern is reminiscent of that previously described for clamp proteins (Froelich et al., 2011), which are thought to anchor organelles to the ER in the high pressure environment of the sieve tube. In Arabidopsis, these clamps have been described as a halo around mitochondria, but not around plastids—much like the localization pattern observed for SLI1.

To examine the mechanism by which SLI1 limits aphid feeding, the authors quantified the rate at which the feeding aphids excreted honeydew droplets, as this metric is highly correlated with the sap ingestion rate (Tjallingii, 1995). Aphids feeding on sli1 mutants secreted honeydew droplets at a significantly higher rate than did those feeding on wild-type plants, suggesting that SLI1 either obstructs the sieve tubes or the aphid food canal.  As an analysis of phloem exudation rates of excised leaves did not reveal an occlusion of the sieve tubes, the authors proposed that SLI1 causes an obstruction, consisting for example of ER membranes or organelles, at the entrance of the aphid food canal.

The authors then examined the fitness of sli1 mutant and wild-type plants grown under normal and heat stress conditions. Plants harboring SLI1 fared better under moderate heat stress than did those lacking this gene. In particular, intense carbohydrate-demanding processes, such as elongation of the inflorescence stem and seed set, were impaired in sli1 plants during heat stress. The authors hypothesized that SLI1 increases sap flow rates under limited water availability by serving as an anchor for organelles and possibly also proteins, and thereby reducing the density of obstacles in the sieve element lumen. This possibility remains to be tested.

Together, these results show that SLI1 is a novel phloem protein involved in both aphid resistance and heat stress tolerance and suggest that the parietal phloem layer contributes to both of these processes. 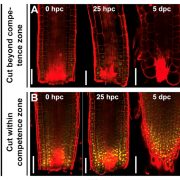 Stop the Clock: Optimized Carbon Fixation and Circadian Rhythm in a CAM Pla...
Scroll to top