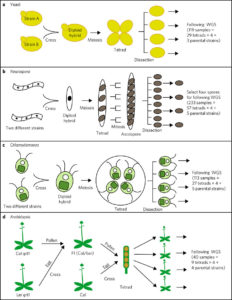 Gene conversion, a mechanism involving the unidirectional exchange of DNA from a donor to an acceptor sequence through homologous recombination, is a major driver of genome evolution. It has been speculated that gene conversion may be biased towards GC alleles, and thus favours accumulation of GC in the genome. Nevertheless, this hypothesis has never been tested at the intra- and inter-species levels using state-of-the-art sequencing methodologies. In tetrad analysis, the four products of meiosis remain physically associated, enabling crossovers to be precisely mapped. In this article, Liu et al. provide a uniform whole-genome sequencing of tetrads isolated from two fungal species (Saccharomyces and Neurospora) and two plant species (Chlamydomonas and Arabidopsis). The data reveal that the gene conversion rate varies largely between the species tested; with the plant species displaying the lowest rates of conversion. Moreover, comparison between local GC content and recombination rate reveals no global GC bias in this phenomenon. This study provides new insights on the impact of gene conversion on genome evolution and offers new perspectives for researchers in population genetics. (Summary by Matthias Benoit) Nature Ecol. Evol. 10.1038/s41559-017-0372-7.