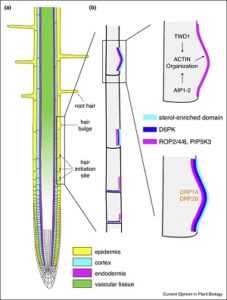 Despite vast differences across all living organisms, most eukaryotes display some form of cellular polarity which enables them to carry out specialized functions. The coordination of cell polarity within a single tissue layer is known as planar polarity. Nakamura and Grebe highlight the unique execution of planar polarity in Arabidopsis root cells. Setting the stage for root hair development, Rho-of-plants (ROP) proteins accumulate near the basal ends of root cells at the outer plasma membrane. This site-specific ROP accumulation is dependent on proper sterol composition and cytoskeleton function and organization. Furthermore, outer polar domains of root epidermal cells appear enriched in proteins involved in the defense and response of biotic and abiotic stresses. This polar distribution has been found to rely on the trans-Golgi network, endocytic trafficking, and actin function for correct protein targeting. Elucidating these mechanisms will not only help further our understanding of fundamental plant development but also how plants sense and respond to environmental stress. (Summary by Alecia Beil) Curr. Opin. Plant Biol. 10.1016/j.pbi.2017.08.002 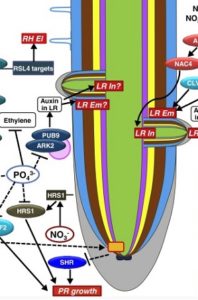 The arrangement of a plant’s root system in the soil (root system architecture, RSA) changes in response to nutrients through different signaling pathways. It is assumed that RSA adapts to optimize the uptake of nutrients from the environment, but strong evidence is still lacking. This review by Shahzad and Amtmann discusses the signaling pathways that describe RSA responses to nutrients such as nitrate and phosphate, as well as responses to multiple nutrients. Current research into the crosstalk between different signaling pathways is also described. Understanding RSA could lead to crops better suited for sustainable production on marginal soils. (Summary by Julia Miller) Curr. Opin. Plant Biol. 10.1016/j.pbi.2017.06.008

Lateral root development in plants is a complex process that involves co-ordination of several molecular components to initiate the formation of meristematic cells. Uncovering the details of these processes is confounded by functional redundancy and tight cyclic regulation of different components in the process. Du and Scheres have recently beautifully elucidated these sequential phenomenon and showed the role of PLETHORA transcription factors in the orchestration of new growth during organ development. They identified master transcription factors involved in triggering the formative cell division, maintening the auxin response maxima and activating and regulating meristematic genes in a tissue-specific manner. The authors show that PLT genes are regulated in two different sets during lateral root growth. The early PLTs (PLT3,5,7) are responsible for generation of inner and outer cell layers and also co-ordinate the activation of the late PLTs (PLT1,2,4) that achieve  the further formation of the de novo meristem. (Summary by Amey Redkar) Proc. Natl. Acad. Sci. USA 10/11/1714410114.abstract 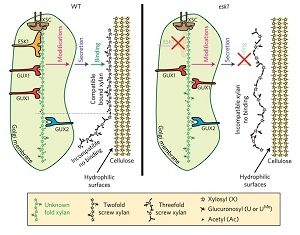 Plant cell wall architecture is a very complex specific design and the interaction between xylan and cellulose is believed to be that way too. Grantham et al. reveal the details of the association between xylan and cellulose using mass spectrometry and NMR in Arabidopsis. ESKIMO1 (ESK1) is a xylan-specific O-acetyltransferase, responsible for adding most of the xylan acetyl groups in a canonical even-pattern distribution which is in phase with 4-O-methylglucuronosyl (U(me)) xylan substitutions. In esk1 mutants, this even-pattern acetylation is lost and plants display a dwarf phenotype with collapsed xylem vessels. Acetylation reduction in esk1 mutants leads to an increase in U(me) and loss of U(me) even-patterning. Through genetic analysis, the authors found that the glucuronosyltransferase GUX1, but not GUX2, is responsible for the even U pattern, likely guided by the acetylation activities of ESK1. Furthermore, the abnormal-patterned xylan substitutions prevented interaction between xylan and cellulose. The authors determined that xylan likely binds the hydrophilic face of cellulose in a manner dependent on this even-patterning of xylan substitutions. Understanding cell wall architecture can be helpful for the processing and application of biomaterials. (Summary by Alecia Beil) Nature Plants. 10.1038/s41477-017-0030-8. 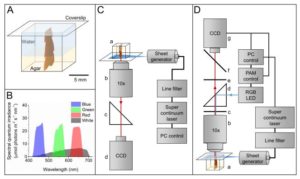 Chlorophyll fluorescence is a common tool to investigate the behavior of the photosynthetic appratus, therefore photosynthetic capacity, at any physiological state. However, the different optical density of the samples can lead to light-dependent over- or underestimation of effective PSII quantum yields. This limitation can be overcome by the combination of multicolor light sheet microscopy and variable chlorophyll fluorescence imaging. This novel technique suggested by Lichtenberg et al. enables the calculation of depth-resolved photon absorption profiles to correct apparent PSII electron transport rates to photons absorbed by PSII, thus allows investigation of other photosynthetic systems with different anatomical structures and pigmentation as well as the role of specific accessory pigments in photosynthesis. (Summary by Quang Vuong Le) Plant Physiol. 10.1104/pp.17.00820. 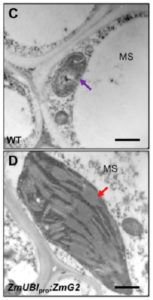 The C4 Rice project aims to transition rice from a C3 crop to one that performs C4 photosynthesis, in order to realize a predicted 50% increase in yield.  Here, Wang et al. expressed a positive regulator of chloroplast development, the maize GOLDEN2-LIKE transcription factor, in rice.  The resulting plants displayed an increased organelle volume in sheath cells, as well as a greater number of plasmodesmata between mesophyll and sheath cells.  The sheath chloroplasts also accumulated the enzymes Rubisco, Rubisco activase and fructose-1,6-bisphosphatase, indicating a capacity for photosynthesis.  These phenotypes constitute a “proto-Kranz” anatomy – the first step on the C4 trajectory – and did not diminish plant fitness.  This work represents a huge step forwards for engineering C4 photosynthesis into rice. (Summary by Mike Page) Curr. Biol. 10.1016/j.cub.2017.09.040 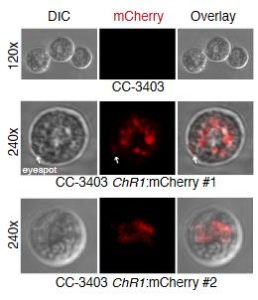 New genome editing technology, such as zinc-finger nucleases and CRISPR/Cas9, are revolutionizing reverse genetics studies because they allow fast and precise genetic modifications in many species. However, they require efficient transformation and selection methods. This is notably a problem for algae such as Chlamydomonas reinhardtii. Greiner et al. describe a procedure that creates antibiotic-resistant clones after successful genetic modification, thus making the selection step much more rapid. In addition, they made several improvements to current transformation protocols for both zinc-finger nucleases and CRISPR/Cas9. Their optimized methodologies allowed the disruption of photoreceptor genes and led to a better understanding of phototropism in Chlamydomonas. (Summary by Elisa Dell’Aglio) Plant Cell 10.1105/tpc.17.00659 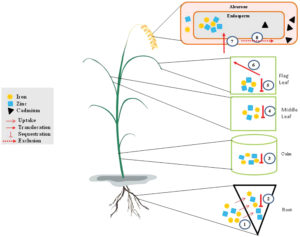 Polished white rice is a major food source for much of the world but is not a good source of the essential micronutrients iron and zinc. Like microbes, plants enhance their uptake of iron from the environment by synthesizing small “iron carrying” molecules called respectively siderophores or phytosiderophores (some of which are also carriers for zinc). Banakar et al. explored the effect of overproduction of two key enzymes in the phytosiderophore biosynthesis pathway.  The transgenic plants overproduced two important phytosiderophores and accumulated higher levels of Fe and Zn in the grain endosperm, Interestingly, the endosperm also accumulated less toxic cadmium, possibly due to competition with the Fe and Zn.  (Summary by Mary Williams) J. Exp. Bot. 10.1093/jxb/erx304 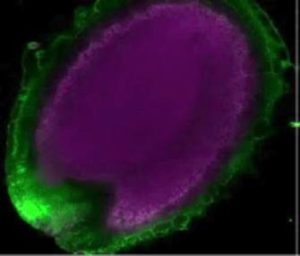 Many nutrients move through the plant body via the phloem. The developing embryo, which depends on the maternal plant for its nutrients, is not directly (symplastically) connected to maternal tissues, so nutrients must be exported across membranes to reach the embryo. PHO1 was identified previously as a phosphate exporter from roots cells into the apoplastic space for loading into the xylem (therefore, pho1 mutants are deficient in phosphate in the shoots). Vogiatzaki et al. showed that PHO1 and its closest homologue PHOH1 are expressed in the chalazal seed coat (CZSC), a specialized tissue involved in nutrient transfer. Using mutant and cell-specific knock-down or complementation methods, the authors showed that, “PHO1 expression in the CZSC is important for the transfer of P from the seed coat to the embryo in developing seeds.” (Summary by Mary Williams) Curr. Biol. 10.1016/j.cub.2017.08.026 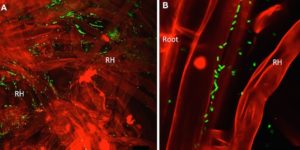 In plants the location of microbes to specific cell types, including endophytes, is still scarcely described in contrast with the situation in the animal kingdom. Shehata et al. describe a bacterial endophyte (Strain 3F11, possibly Enterobacter asburiae) from Zea nicaraguensis, a wild corn growing at a Nicaraguan swamp located above rock phosphorus (P) lava flowing from a nearby volcano.  This P is insoluble and therefore extremely difficult to be absorbed by plants. Endophytic bacteria 3F11 helps this particular wild corn by promoting P absorption and subsequent plant growth. It does this by helping with phosphate solubilation though colonization of specific root hair cells and acidification of the soil in the said environment.  Given the endangered species status of Zea nicaraguensis, this plant species and probably others may benefit from being conserved together with their associated microbia. (Summary by Isabel Mendoza)  Sci Reports 10.1038/s41598-017-14080-x 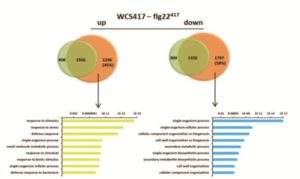 A plant’s rhizosphere consists of a huge array of pathogenic microbes many of which can trigger defense responses, leading to decreased growth. On the other hand, beneficial microbes such as rhizobacteria promote growth and can induce systemic resistance while suppressing local immune responses. A recent study aimed to understand the differential host responses towards the colonizing pathogenic or beneficial rhizobacteria like Pseudomonas simiae (WCS417). Stringlis et al. carried out a comprehensive time-resolved RNA-seq of Arabidopsis roots in response to either the rhizobacteria WCS417 strain or the pathogenic epitope MAMPs flg22417 (from WCS417), flg22Pa (from pathogenic P. aeruginosa) or fungal chitin. The transcriptional responses display a large overlap of 74% of genes between different treatments, although they differ temporally. WCS417 was unique in its ability to actively suppress MAMP-triggered transcriptional responses. Additional comparison of flg22417 to WCS417 transcriptional responses demonstrated a high proportion of auxin-related genes regulated during rhizobia colonization. This study provides evidence for a dual role of auxin signaling in balancing growth and defense responses upon colonization of plants by growth promoting rhizobacteria. (Summary by Amey Redkar) Plant J. 10.1111/tpj.13741/abstract 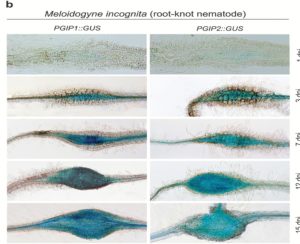 Roots must protect themselves from a diverse range of microbial and animal pests. To accomplish this, plants have evolved sophisticated signalling machinery to detect the presence of these pests or to quickly react to the damage that they cause. In a recent study, Shah et al. identified host receptor proteins that detect the damage-associated release of cell wall components caused by parasitic nematodes. Phenotypic analyses of receptor knockout and overexpression lines demonstrated the importance of these receptors in mitigating the extent to which certain parasitic nematodes could cause damage. Specifically, their expression attenuates infection by cyst but not root-knot nematodes. These results underscore the importance of damage-associated signalling pathways in response to nematode parasitism and suggest that certain nematodes are better suited to manipulate plant roots than others. (Summary by Philip Carella) J. Exp. Bot. 10.1093/jxb/erx374 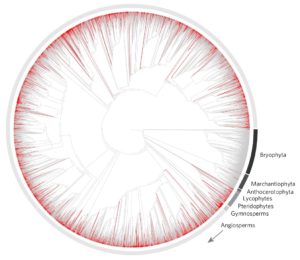 Botanical gardens are sanctuaries where plant diversity is celebrated, conserved, studied, and shared. As more species are put under pressure from anthropogenic activities, the importance of botanical gardens in preserving and protecting threatened species is increasing. A recent study on the role of botanical gardens in ex situ plant conservation has emphasized the role these gardens play in maintaining species diversity and continued survival. According to the study, 41 % of endangered species are held in ex situ botanical gardens. Despite this large representation of endangered species, 90 % of gardens are devoted to species not identified as at risk, illustrating the potential to increase the numbers of threatened species with current resources. The study also highlighted biases in species that are selectively kept. Temperate species are preferentially held over tropical species, and vascular plants enjoy far greater representation than non-vascular plants. These biases could directly alter the prolonged existence of endangered, underrepresented species, including threatened tropical species and non-vascular plants such as bryophytes. With particularly the latter representing key stages in land plant evolution, more efforts should be made in protecting these diverse lineages as well. (Summary by Danielle Roodt Prinsloo) Nature Plants 10.1038/s41477-017-0019-3

An even pattern of xylan substitution is critical for interaction with cellulose...

The role of botanical gardens in species conservation
Scroll to top