The environment of the natural world in which plants live, have evolved, and within which photosynthesis operates, is one characterised by change. The time scales over which change occurs can range from seconds (or less) all the way to the geological scale. All of these changes are relevant for understanding plants and the vegetation they create. In this update review we will focus on how photosynthesis responds to fluctuations in irradiance with time constants up to the range of tens of minutes.  Photosynthesis is a highly regulated process, in which photochemistry as well as the electron and proton transport processes leading to the formation of ATP and reducing power (reduced ferredoxin and NADPH) need to be coordinated with the activity of metabolic processes (Foyer and Harbinson, 1994). Light, temperature, the supply of the predominant substrate for photosynthetic metabolism (CO2), and the demand for the products of photosynthetic metabolism are all factors that are involved in short-term alterations of steady-state photosynthetic activity. The coordinated regulation of metabolism with the formation of the metabolic driving forces of ATP and reducing power is subject to various constraints that limit the freedom of response of the system.  Of these constraints, the most prominent are the need to limit the rate of formation of active oxygen species by limiting the lifetime of excited states of chlorophyll a and the potential of the driving forces for electron transport (Foyer and Harbinson, 1994; Foyer  et al., 2012; Rutherford et al., 2012; Murchie and Harbinson, 2014; Liu and Last, 2017); limiting the decrease of lumen pH to avoid damaging the oxygen evolving complex of  PSII (Krieger and Weis, 1993), and adjusting stomatal conductance (gs) to optimise  photosynthetic water-use efficiency (Lawson and Blatt, 2014). 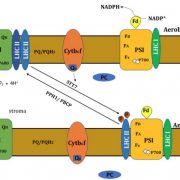 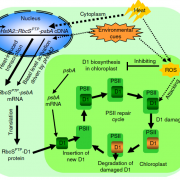 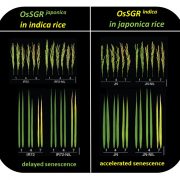