Rubisco is responsible for CO2 fixation during photosynthesis. This enzyme is assembled from eight large subunits (RbcL), encoded by a single chloroplast gene, and eight small subunits (RbcS), encoded by a nuclear gene family. Although Rubisco’s catalytic reaction is mostly controlled by the large subunit, the small subunit also positively influences the reaction. In vascular plants, Rubisco is primarily found in the photosynthetic ground tissue of leaves and stems. In certain species, however, photosynthesis also takes place in the secretory cells of glandular trichomes, epidermal outgrowths (hairs) involved in the secretion of specialized metabolites. In general, little is known about photosynthesis in trichomes, although its main function may be to help provide the carbon and energy needs for specialized metabolite production. Laterre et al. (10.1104/pp.17.00062) show that the chloroplasts of glandular trichomes from tobacco (Nicotiana tabacum) contain a novel RbcS that is common among other trichome producing plant species and whose sequence is phylogenetically distinct from the RbcS isoforms made in mesophyll cells. When transformed into an RbcS-lacking mutant of the green alga Chlamydomonas reinhardtii, both mesophyll and trichome RbcS isoforms from tobacco assembled with the algal RbcL to form functional RbcL8RbcS8 hybrid enzymes that restored photosynthesis-dependent growth. Differences in the pH-dependent activities of each hybrid Rubisco, as well as the native trichome and mesophyll Rubisco, suggest that the trichome specific expression of the alternative RbcS may be an adaptation related to the specialized metabolism of secretory cells. 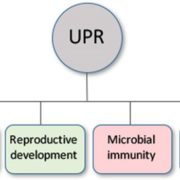 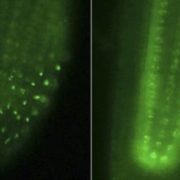 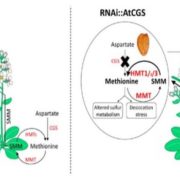