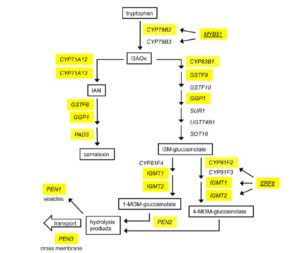 Plants perceive microbial pathogens though cell-surface receptors that recognize conserved microbial patterns such as flagellin. Previous studies have identified the WRKY family of transcription factors as contributors to Microbial-Associated Molecular Pattern (MAMP)-Triggered Immunity (MTI). Birkenbihl et al. use chromatin-immunoprecipitation to identify direct targets of three WRKY transcription factors following stimulation by the MAMP peptide flg-22. Their study reveals some overlap in the targets of two of the WRKYs (WRKY18 and WRKY40), and also some overlap with genes induced by damage in the Damage-Associated Molecular Pattern response. Other classes of WRKY targets include genes involved in production of defense compounds such as camalexin and indole glucosinolates, and genes involved in hormone (e.g., ethylene, salicylic acid, jasmonic acid) responses. This work provides an important dataset to expand our understanding of plant immunity.  Plant Cell 10.1105/tpc.16.00681 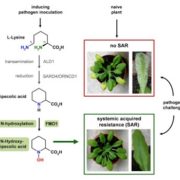 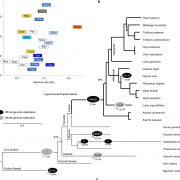