By Baoqing Ding and Yao-Wu Yuan, University of Connecticut

Background: About one third of all angiosperm species produce flowers with petals fused into a structure called the corolla tube. The tremendous diversity of corolla tube length, width, and curvature observed in flowering plants has enabled species to exploit many specialized pollinator groups (e.g., bee flies, hawkmoths, hummingbirds, nectar bats), which in turn drives rapid plant speciation. However, little is known about how the corolla tube is formed during flower development at the molecular level.

Question: We wanted to know what genes and developmental mechanisms were involved in corolla tube formation. We approached this question by chemically mutating the DNA of the monkeyflower species Mimulus lewisii and searching for mutants with defective corolla tubes. We then sequenced the genomic DNA of two mutants named flayed1 and flayed2, to identify the genes that were impaired and studied how these genes affected corolla tube development.

Findings: We found that FLAYED1 and FLAYED2 encode proteins that are known components of the biogenesis pathway of a special type of small RNAs called trans-acting short interfering RNAs (tasiRNAs). These tasiRNAs and their target AUXIN RESPONSE FACTOR (ARF) genes play a critical role in leaf polarity establishment and blade expansion in a wide range of plant species. Consistent with previous studies, we demonstrated that in the M. lewisii mutants, these tasiRNAs decreased dramatically in abundance while their target ARF genes were upregulated. Importantly, we also showed that malfunction of the tasiRNA-ARF pathway impeded the early lateral expansion of the petal primordium bases and the coordinated inter-primordial growth, through changes in auxin homeostasis, leading to unfused petal primordia. These results suggest a new conceptual model highlighting the central role of auxin directed synchronized growth of the petal primordium base and the inter primordial region in corolla tube formation.

Next steps: Moving forward, we wish to learn more about the functional mechanism that link changes of ARF gene expression levels and the change in auxin signaling and growth patterns in the developing corolla by identifying proteins that interact with the ARF proteins, as well as genes that are regulated by them.

On the Inside: Biosynthesis of Trilobatin, a Natural Sweetener 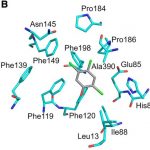 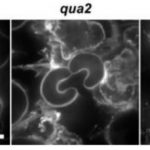 Let’s stick together – a pectin biosynthetic mutant reveals the interconnectedness...
Scroll to top