Background: Salt stress can significantly affect plant growth and agricultural productivity. When plants suffer from abiotic stresses, production of reactive oxygen species (ROS) such as hydrogen peroxide (H2O2) is enhanced and excessive accumulation of ROS is potentially harmful to cells. Catalase (CAT) can decompose H2O2 to water and oxygen, and plays a critical role in plant responses to abiotic stresses. CAT activity can be activated by protein kinase through phosphorylation, and receptor-like kinases (RLKs) plays essential roles in plant responses to abiotic stresses. 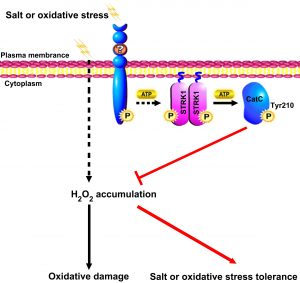 A proposed model for the role of STRK1 in regulation of salt or oxidative stress tolerance.

Question: We wanted to know if RLKs could phosphorylate CAT in response to salt stress. We tested this by screening the salt-induced RLKs and analyzing transgenic rice overexpressing different versions under salt stress.

Findings: We found that a salt tolerance receptor-like cytoplasmic kinase (STRK1) could positively regulate salt and oxidative stress tolerance in rice. In addition, we discovered that STRK1 could anchor at the plasma membrane via palmitoylation and phosphorylate CatC mainly at tyrosine residue (Tyr210) to activate its activity. Then the activated CatC would decompose the excessive H2O2 induced by salt stress and enhance in turn the salt tolerance in rice. We also guess that STRK1 might be a key component to transduce the salt signal from an unknown RLK complex to the downstream effector CatC via tyrosine phosphorylation. Notably, overexpression of STRK1 in rice not only improved growth at the seedling stage but also markedly limited the grain yield loss under salt stress conditions.

Next steps: Scientists aim to reveal the mechanism of salt signal transduction to breed new crop varieties with higher tolerance to salt stress. Our work demonstrates that STRK1 is a promising candidate gene for protection of yield in crop plants exposed to salt stress. 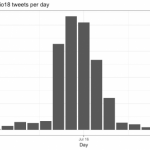