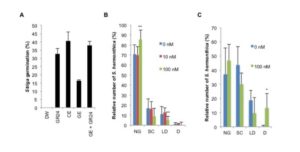 Strigolactones Root parasitic weeds, such as broomrape (Orobanche spp.) and witchers weed (Striga spp.), are harmful plants in sub-Saharan Africa, the Middle East, and Asia that maintain seed dormancy in the absence of host plant. Both parasitic plant species require germination stimulants released from the host plant. SLs are the major group of germination stimulants effective for almost all Orobanche and Striga spp. It has been reported that approximately 300 million people are affected economically by Striga spp. in Africa, with estimated losses of $US 7 billion SLs also regulate diverse physiological processes in plants in general, including shoot branching and root development. They also act as rhizosphere signaling molecules to stimulate the germination of root parasitic weeds and the branching of arbuscular mycorrhizal fungi. Although various types of cross talk between SLs and other hormones have been reported in physiological analyses, the cross talk between gibberellin (GA) and SLs is poorly understood. Ito et al. (​10.​1104/​pp.​17.​00301) screened for chemicals that regulate the level of SLs in rice (Oryza sativa) and have identified GA as a novel SL-regulating molecule. The regulation of SL biosynthesis by GA is dependent on the GA receptor GID1 and F-box protein GID2. GA treatment also reduced the infection of rice plants by Striga. GA is a regulator of SL biosynthesis, and that GA signaling controls the biosynthesis of SL by regulating the expression of SL biosynthesis genes. Moreover, GA-treated rice showed reduced Striga infection. These data not only demonstrate cross talk between SL and GA, but also suggest that GA might be used to control parasitic weed infections.

Plant Scientists in the Wild (#FoPD)