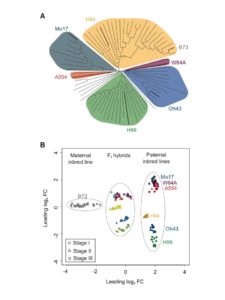 In maize, it has long been known that the crossing of two inbred lines can produce a hybrid offspring with higher yield than the parents. Baldauf and collaborators have studied the gene expression of 6 hybrid lines coming from 7 distantly related inbred lines. One line, B73, was chosen as the common female parent, since it is widely used in breeding programs and has been sequenced. Through RNA sequencing they found that in all hybrids Single Parent Expression (SPE) occurred and that the hybrids expressed between 500 to 600 more genes than the parents. The proportion of non-syntenic genes displaying SPE was also determined; they were overrepresented when compared to all expressed genes. Further analysis of the non-syntenic genes displaying SPE showed that the bZIP and bHLH families of transcription factors were overrepresented, which could explain to a certain degree explain the better performance and plasticity of hybrid maize. (Summary by Cecilia Vasquez-Robinet)  Curr. Biol. 10.1016/j.cub.2017.12.027 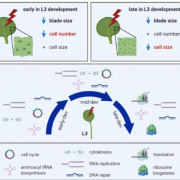 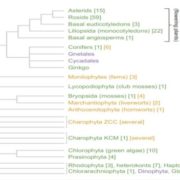 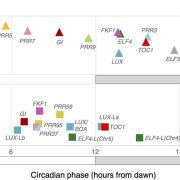