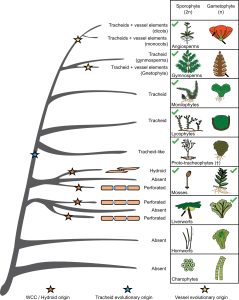 The development of vascular plants (tracheophytes) was a major innovation during the evolution of land plants. The classic view is that the evolution of transporting tissues is distinct to tracheophytes, but Woudenberg and Renema et al. discuss an alternative hypothesis where this was a gradual process that is already seen in bryophytes. The authors propose using the terms water-conducting cells (WCCs) and food-conducting cells (FCCs) to encompass these tissues with similar properties across bryophytes and tracheophytes, comparing bryophyte hydroids and leptoids with tracheophyte tracheids and sieve elements. They emphasise the importance of fossil records in elucidating the deep evolutionary origin of these tissues, discussing the hypothesis for a common origin of FCCs in bryophytes and tracheophytes. The incomplete fossil records, especially for bryophytes, still leave many questions unexplored. Although molecular insights for bryophyte transport tissue are also lacking, work from model systems shows promise in studying some highly conserved proteins and processes in vasculature development. In WCC development, auxin and cytokinin signalling are conserved but their exact roles may differ in bryophytes compared to Arabidopsis. Also, lignin in the cell wall is unique to tracheophytes, but enzymes involved in making the precursors for lignin are present in bryophytes; they might perform other roles or are involved in the synthesis of lignin-like components. By combining advances in studying the fossil record and identifying conserved proteins with distinct roles in tracheophytes and bryophytes, we are closer to gaining a comprehensive understanding of transport tissue evolution in land plants. (Summary by Jiawen Chen) Plant Physiol. 10.1093/plphys/kiac304 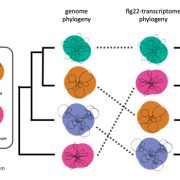 Exploring the evolution of immunity responses in Brassicaceae 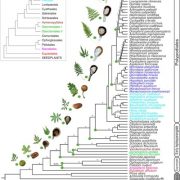 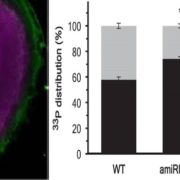 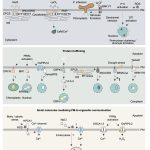 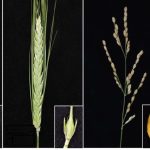