Humans have domesticated crops for thousand of years by artificially selecting plants for numerous traits including morphology, lower toxicity or higher yield. As a result, plant domestication often altered plant fitness and resistance to stress under controlled conditions (Meyer & Purugganan 2013). Typically, in tomato the fruit size was improved at the cost of plant stress sensitivity. Indeed, Solanum pennellii, a wild species relative to tomato, is more tolerant to both biotic and abiotic stresses than the domesticated tomato.

Plant development and resilience to environmental stresses strongly depend on the plants ability to regulate gene expression. Such regulation is achieved through the interaction of transcription factors (TFs) and cis-regulatory elements (CREs) in gene promoters and gene bodies. Divergence in gene regulation is generated mostly by sequence variation at the regulated genes that creates new CREs or CRE variants that affect the TF binding potential (Wittkopp & Kalay 2012). Theses sequence divergences in CREs are major players of phenotypic divergence and explain many domestication traits in crop species (Swinnen et al. 2016). The contribution of regulatory divergence to complex traits such as stress response remains mostly unknown. 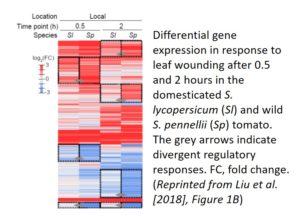 Liu et al. (2018) make use of the 3-7million years of genetic divergence between wild (S. pennellii) and domesticated (S. lycopersicum) tomato species to uncover the likely causes of wound-response regulatory divergence. The study revealed that the response to artificial leaf wounding is massively different between the two tomato species: the speed and amplitude of the response vary, as well as the number of genes involved (Figure 1). S. pennellii has stronger constitutive defenses to start with in addition to faster response to wounding. S. pennellii reacts by massively down-regulating genes including photosynthesis and metabolic pathways. On the other hand, S. lycopersicum induces a larger number of defense-related genes.

To understand the genetic basis of these different regulatory programs, Liu and coauthors explored variation in putative cis-regulatory elements (pCREs). The pCREs were identified by bioinformatics detection of enriched short DNA sequence motifs upstream of wound-response genes. The authors found that the minority (24-52%) of pCREs are present in both tomato species while the remaining pCREs are species specific. Although concerning a minority of pCREs, the sequence variations in the consistently enriched pCREs are largely predictive of the divergence in gene regulation as the authors noted a correlation between pCREs site conservation and conservation of the gene expression response.

Altogether, each tomato species evolved its own collection of pCREs that fine-tune gene expression within species, while further modifying the core group of pCREs shared between species and predictive of wound-response regulatory divergence. These results suggest major divergence in wound-response gene regulation over the millions years of evolution by natural and artificial selection. This study further confirms large-scale genome divergence analyses of these two species (Kamenetzky et al., 2010) while providing new insights into the evolution of regulatory elements with tomato domestication.