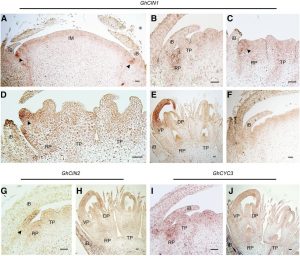 The reproductive structures of the Asteraceae (the sunflower family), the largest family of flowering plants, are among the most complex within the flowering plants. The species in this family develop head-like inflorescences that resemble flowers. In many Asteraceae flowers, the hermaphroditic disc flowers are less conspicuous and radially symmetrical and are located in the center of the head. The marginal ray flowers are bilaterally symmetrical, female, or neuter, and develop large and showy ventral ligules (lips of fused petals) that serve to attract pollinators. Across the eudicots, bilateral flower symmetry has evolved independently a number of times and is known to be regulated by the CYCLOIDEA/TEOSINTE BRANCHED1 (CYC/TB1)-like transcription factors belonging to the TEOSINTE BRANCHED1/CYCLOIDEA/PROLIFERATING CELL FACTOR (TCP) protein family. However, in the Asteraceae these transcription factors are involved in ray flower identity. GhCYC3 is exclusively expressed in marginal ray flower primordia. It also shows the greatest expression in elongating ligules in contrast with the other five CYC2 clade genes that show constant and low expression levels throughout ligule development. Zhao et al. (10.1104/pp.20.00702) have identified several upstream regulators of GhCYC3 in the model aster Gerbera hybrida. For example, the authors identify a functional role for the paralogous CINCINNATA-like TCP proteins that function upstream of GhCYC3 and affect the developmental delay of marginal ray primordia during their early ontogeny. Additionally, the authors identify other transcription factors, including some MADS-box transcription factors, that also regulate GhCYC3 expression during ligule development. The data presented demonstrate how interactions among and between the conserved floral regulators, TCP and MADS-box transcription factors, contributed to the evolution of the elaborate inflorescence architecture of the Asteraceae.

On how to build a larger and healthier Arabidopsis ROSette using a mitochondrial... 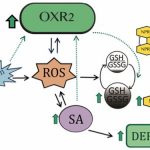 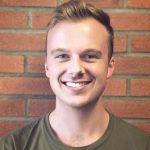