Cellular respiration is at the core of central metabolism, generating energy out of simple hydrocarbon molecules. This energy runs fundamental functions of the cell. A collateral effect of aerobic metabolism is the production of reactive oxygen species (ROS) with potential to damage biological molecules and structures. The cell has myriad sets of mechanisms to control the damage derived from respiration (Noctor and Foyer, 2016). The chloroplast and mitochondria are the organelles par excellence of ROS production that have acquired different strategies to avoid or mitigate their impact (Huang et al., 2016). Interestingly, the ROS within organelles or at the inner side of the plasma membrane can additionally help the plant under certain situations, such as abiotic stress (Colombatti et al., 2019; Wang et al., 2020).

In eukaryotes, one of these strategies requires the activity of the OXIDATION RESISTANCE (OXR) protein family responsible for the prevention of oxidative DNA damage and induction of antioxidant enzymes using a still-unknown mechanism. The physiological relevance of OXRs is supported by strong phenotypes in loss-of-function mutants across species, such as neurological disorders in mammals (Finelli and Oliver, 2017). In Arabidopsis, the OXR family is composed of six genes and is part of a protective mechanism to restrain respiration-associated damage (Colombatti et al., 2019; Torti et al., 2020). 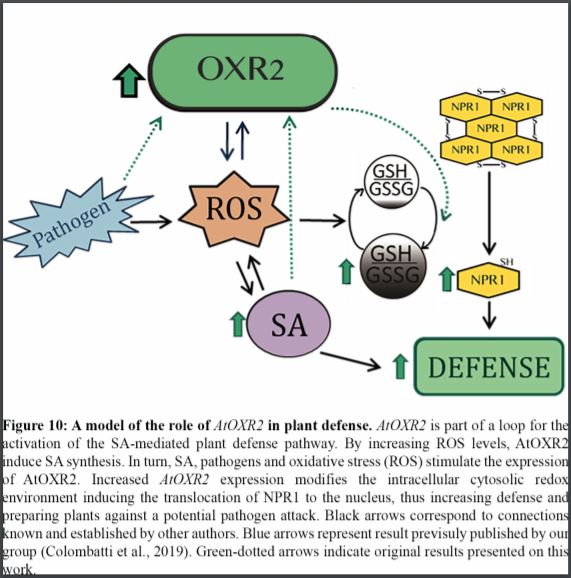 In this issue of Plant Physiology, Mencia et al. (2020) establish that the specific action of the OXR2 mitochondrial protein results in a significant improvement in Arabidopsis protection against bacterial pathogens (Mencia et al., 2020). Using plants with altered expression levels of OXR2, they showed that ROS—produced through the isochorismate pathway—is associated with the enhanced defense response of OXR2-overexpressing (oeOXR2) plants and the increased susceptibility of the oxr2 mutant.

Mencia et al. (2020) describe several OXR2-mediated events related to the SA-defense response of Arabidopsis. Analyzing the transcriptional profile of oeOXR2 plants, they found an important transcriptomic overlap between non-infected oeOXR2 plants and wild-type plants infected with a biotrophic pathogen and, to a lesser extent, an overlap with mutants related with hormonal pathways. Therefore, the ectopic expression of OXR2 triggers a molecular response emulating the presence of a pathogen and activates hormonal pathways related to defense responses of the plant. Among the events leading to the improved resistance of oeOXR2 plants to Pseudomonas syringae pv. tomato DC3000 (Pst DC3000) they found increased levels of salicylic acid (SA) and ROS, enriched nuclear localization of NONEXPRESSOR OF PATHOGENESIS-RELATED GENES 1 (NPR1) associated with an increment of glutathione oxidation in the cell and high expression of SA-marker genes, even before exposure to the pathogen. The oxr2 mutant showed a contrasting behavior, with a delayed defense response leading to increased susceptibility to the pathogen and triggering a lower production of SA with low induction of some early and late SA-marker genes. Altogether, OXR2 expression levels somehow controls the activation of the SA response, alters the oxidation environment in the cell, and at least partially modulates ROS production in plant tissues. It remains unclear how OXR2 expression levels are associated with resistance levels depending on the pathogen. If Arabidopsis plants become more resistant to Pst DC3000 through the induction of OXR2, it is unclear why other pathogens, such as the hemibiotroph oomycete Phytophthora parasitica and the necrotrophic fungus Sclerotinia sclerotiorum, repress OXR2 expression (Mencia et al., 2020). It will be interesting to test the ability of oeOXR2 plants to defend against P. parasitica and S. sclerotiorum and to identify Arabidopsis ecotypes in which OXR2 is not downregulated by these pathogens during the infection process. The pathogen’s ability to control OXR2 expression levels as part of the infection process could be another entry point for pathogens into the plant.

Previous reports showed that increased SA levels accompanied by high-endogenous ROS have a penalty on rosette growth, as observed for the cpr5 mutant (Meng et al., 2017). However, oeOXR2 plants bearing high levels of both SA and ROS are still able to produce larger rosettes compared to wild-type plants, opening interesting questions with potential biotechnological impact (Colombatti et al., 2019; Mencia et al., 2020). Using oeOXR2 plants, Mencia et al (2020) also identified altered expression for several genes related to growth-promoting hormones like gibberellins and cytokinins. If these genes are at least partially responsible for the phenotype of larger rosettes and enhanced pathogen tolerance, could they be part of a novel layer of regulation of the growth-defense trade-off? Could ROS levels and ROS compartmentation control the expansion of green tissues while modulating the pathogen infection? Now, there is strong evidence that the plant microbiome, including belowground and aboveground plant-associated bacteria, influences plant growth, health and stress resilience (Rudrappa et al., 2008). If OXR2 is able to directly or indirectly modulate the plant microbiota, it might indirectly influence plant growth and defense.

The study by Mencia et al (2020) identifies a series of events required for this puzzling connection between ROS, mitochondria and environmental stress. Yet, the contribution of OXR2 in natural conditions remains unclear, including in the face of different types of pathogens, light and temperature fluctuations and water deficit. Can OXR2 be a novel marker for crop breeding programs to manipulate SA-inducible defenses with a low penalty in growth? Since crop-breeding programs are now integrating multiple avenues, it might be relevant to explore the contribution of ROS and OXR-related genes in complex traits. 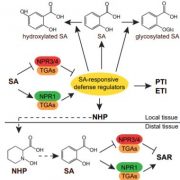 Zones of Defense? SA Receptors Have it Under Control 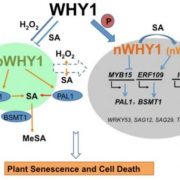 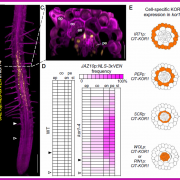 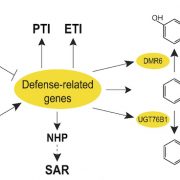 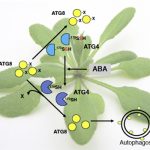 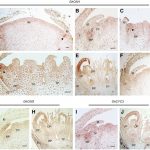