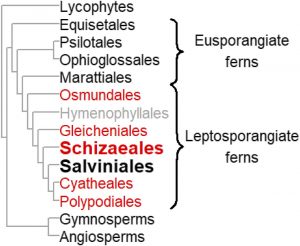 Stomata respond to changes in the light environment through multiple mechanisms that jointly regulate the tradeoff between carbon assimilation and water loss. The rapid and highly sensitive widening of stomatal aperture in response to low-fluence blue light is present in most vascular plant groups but is widely believed to have been lost in the ancestor of leptosporangiate ferns. Previous surveys of the fern orders in this regard, however, are not complete: the orders Schizaeales and Salviniales have not been tested for stomatal responses to a low-fluence blue light. Westbrook and McAdam (10.1104/pp.20.00967) now report that stomatal responses to blue light are absent in Lygodium japonicum (Schizaeales) but do occur in Regnellidium diphyllum and Marsilea minuta (Marsileaceae, Salviniales). In most plants studied to date, the primary pathway initiated by blue light perception in guard cells involves phototropins and culminates in guard cell H1-ATPase activation, which hyperpolarizes the plasma membrane and consequently increases guard cell turgor. Preliminary evidence, however, suggests that the signaling networks integrating blue light stomatal responses with other influences on stomatal aperture differ between Marsileaceae and angiosperms. These results are consistent with the hypothesis of a secondary evolution of stomatal responses to blue light in Marsileaceae, which may have been driven by a selective pressure for high photosynthetic capacities and rapid responses to environmental change. The Marsileaceae are an unusual group exhibiting several convergences with angiosperms, including heterospory, vessel elements, high rates of gas exchange, superficially angiosperm-like stomatal kinetics, and blue-light stomatal sensitivity. 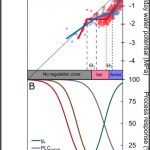 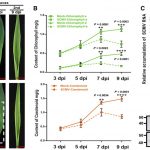