Thousands of years of artificial selection have produced rice plants (Oryza sativa) that are vastly different from their wild progenitor species in terms of architecture, yield, and resilience. Most of the genetic changes linked to rice domestication involved genes encoding transcription factors. However, gain and loss of microRNAs (miRNAs), the class of small RNAs (21–24 nt) that silence specific target genes, may also have driven rice domestication (Wang et al. 2012).

miRNAs have important functions in plant development, physiology, and stress responses. In some cases, miRNA-mediated silencing is amplified by the production of a fleet of secondary small interfering RNAs (siRNAs) that silence a multitude of mRNAs, a process that requires RNA-DEPENDENT RNA POLYMERASE 6 (RDR6). miRNA length is a strong determinant of this type of silencing cascade; 22-nt miRNAs are sufficient, but not essential, for triggering secondary siRNA production (Manavella et al., 2012). 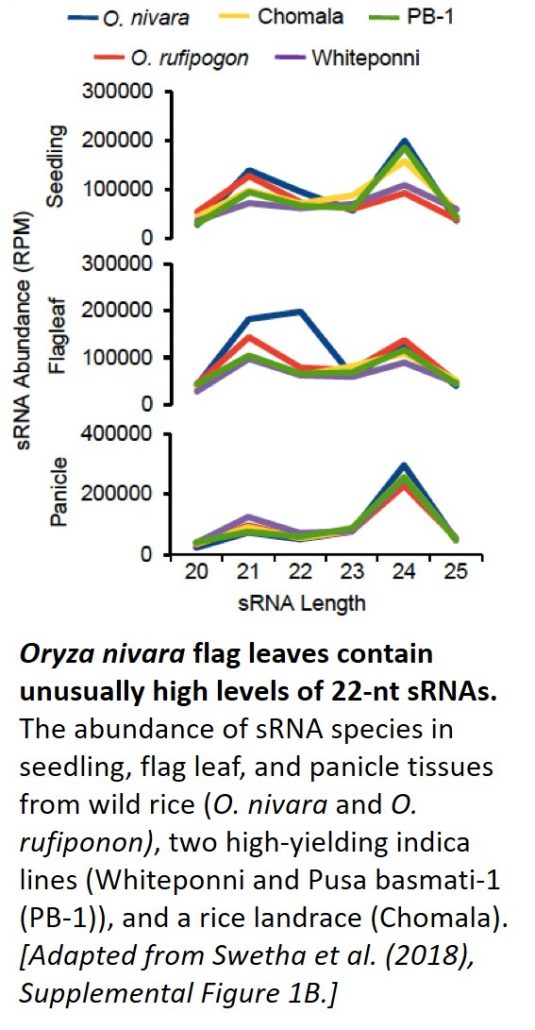 The authors next examined whether the 22-nt miR397 abundant in O. nivara flag leaves triggered an RDR6-dependent silencing cascade. The team identified eight regions within O. nivara laccase genes that function as secondary siRNA-producing loci and used a heterologous system to demonstrate that miR397 indeed initiates an RDR6-dependent silencing cascade. As expected, the expression of several laccase genes was substantially reduced in O. nivara and the stems of these wild rice plants accumulated much less lignin than the domesticated rice plants.

Indica lines transgenically expressing MIR397 had reduced lignification and were more similar to O. nivara than to the domesticated lines with respect to yield and panicle, leaf, and stem architecture. Furthermore, twenty-six uncharacterized QTLs previously linked to rice yield overlapped with laccase and MIR397 loci. Thus, the loss of the silencing cascade initiated by miR397 appears to have contributed to key yield-related traits associated with indica rice domestication.

Microtubules Direct Lignin and Xylan Deposition in a Cellulose-Independent ...