Although secondary cell walls represent the bulk of plant biomass, the mechanism by which cellulose, hemicellulose, and lignin assemble into a functional three-dimensional matrix is unknown. Cortical microtubules are thought to guide cellulose deposition in the plasma membrane by defining the trajectories of the cellulose synthase complex (CSC; Paradez et al., 2006), whereas hemicelluloses and lignin monomers are produced in the Golgi complex and secreted via vesicular trafficking. Hemicelluloses interact with cellulose microfibrils, forming a stable network, and lignin interacts with hemicelluloses. According to the self-perpetuating cascade model, the localization of cellulose in the secondary cell wall determines the patterning of other cell wall biopolymers (Taylor and Haigler, 1993). 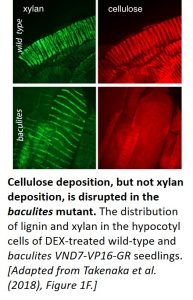 The team then compared the patterning of cellulose, xylan (a hemicellulose), and lignin in the vessel cells of DEX-treated wild-type and baculites VND7-VP16-GR seedlings. Following fixation, cellulose and xylan were detected by confocal microscopy using Pontamine Fast Scarlet 4B and anti-xylan antibody LM10, respectively (see figure), whereas lignin was visualized using multiphoton microscopy. All three biopolymers displayed a helical pattern of distribution in the secondary cell walls of wild-type plants. Even though cellulose deposition was disrupted in the baculites plants, the distribution of xylan and lignin was unaffected, demonstrating that the patterning of these biopolymers does not rely on cellulose localization. Time-lapse analysis showed that strong, linear xylan signals were absent in the mutant at later stages of protoxylem vessel development. Thus, while cellulose is not required for the helical deposition of xylan, it appears to be required for the continued organization of xylan.

Given that microtubule rearrangement precedes secondary cell wall development (Oda et al., 2005), the authors next investigated the effect of disrupting the microtubule array on the patterning of each of the cell wall biopolymers. Treatment with the microtubule-depolymerizing drug oryzalin disrupted the helical distribution of xylan and lignin in baculites VND7-VP16-GR seedlings, revealing that the cellulose-independent deposition of these secondary cell wall components is directed by cortical microtubules.

In Brief: Loss of a Silencing Cascade Contributed to Indica Rice Domesticat...
Scroll to top