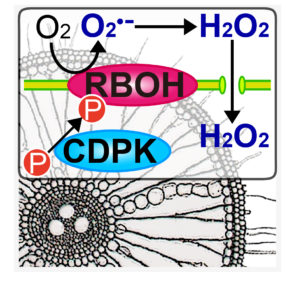 Plants, like animals, need oxygen for respiration (the metabolic process of breaking down sugars to get energy). In leaves, photosynthesis produces oxygen and sugars from carbon dioxide and water, so these plant cells typically have plenty of oxygen. However, root cells need to take up oxygen from the atmosphere. Roots also need to take up water from the soil to support plant growth. Nevertheless, plants growing in flooded or waterlogged soil can die from lack of oxygen, as water fills the spaces between the soil grains and prevents respiration in root cells.

Rice is a crop that can flourish in flooded soils, whereas many other plants will die, so flooding of rice paddies is an important way to control weeds in rice fields. However, even rice plants can suffer yield loss or die if the water is too deep for a long time. In response to waterlogging, rice and many wetland plants form gas spaces called “aerenchyma” by inducing the death of cells inside the roots, allowing oxygen to be transported from leaves down to the roots. Aerenchyma thus play an important role in the survival of rice and other plants under waterlogged conditions.

Curiously, only some cortical cells die while others do not during aerenchyma formation. The authors hypothesized that the cells that die have greater activities of these CDPK and/or RBOH enzymes. Future studies will focus on understanding how these enzymes are regulated in each root cell. Because flooding can cause tremendous crop yield losses, understanding how plants tolerate waterlogged conditions can help to develop improved rice varieties as well as other flood-tolerant crop plants. 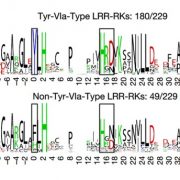 A Surprising Function for Gene Introns
Scroll to top