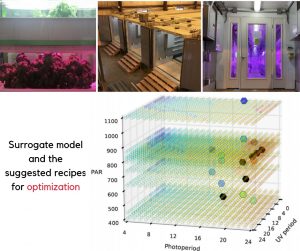 Cyber-agriculture is a computer-controlled plant growing environment which regulates climatic conditions through machine learning, finding optimized variables (“recipes”) to maximize a specific plant trait. Here, Johnson et al. applied cyber-agriculture to chemotype optimization for flavor in basil (Ocimum basilicum) through surrogate modeling. As light exposure has been shown to increase aromatic molecules concentration, the study variables were UV-B light period, photosynthetic-active radiation (PAR) values, and photoperiod. A chemscore was used as a target metric of flavor by using gas chromatography-mass spectrometry (GC-MS) for semiquantitative volatiles analysis. Symbolic regression iterations were made to build predictive surrogate models, which suggested long photoperiods and long UV periods. The recipes were tested in the Food Computer with a hydroponic configuration, resulting in improved flavor concentration, with plant mass losses. This demonstrates the “dilution effect”, the well-known mass yield/flavor tradeoff. Furthermore, this model helped to realize the dominating effect of photoperiod and the constant-daylight positive effect. Cyber- agriculture is a helpful technique that will change agriculture in the future as it is safe, it minimizes costs and is automatically built enabling faster plant quality upgrades. (Summary by Ana Valladares). PLOS One. 10.1371/journal.pone.0213918 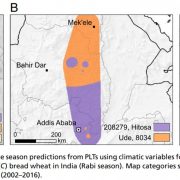 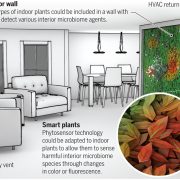 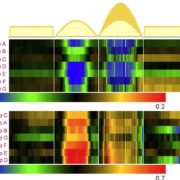 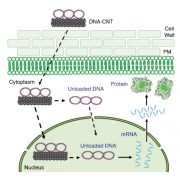 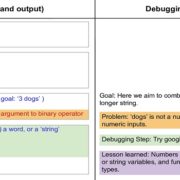 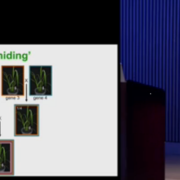 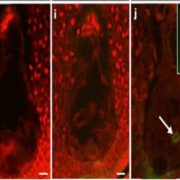 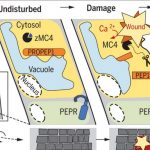 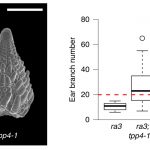 Moonlighting activities and control of meristem maintenance in maize ($) (Nature...