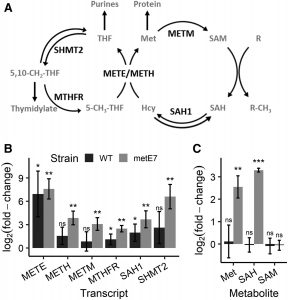 synthesize B12 and must instead obtain it from certain B12-producing prokaryotes. In many algae, B12 is required as a cofactor for the B12-dependent Met synthase enzyme (METH), although some algae encode a B12-independent isoform of this enzyme (METE) and thus do not require B12 for growth. The chlorophyte Chlamydomonas reinhardtii possesses a functional copy of METE and so is B12-independent. Previously, researchers associated with Bunbury et al. (10.1104/pp.19.01375) have reported that they had been able, over the course of ~500 cell generations, to generate a METE mutant of C. reinhardtii (metE7) by experimental evolution under  conditions of high vitamin B12 concentration, demonstrating that sustained levels of B12 in the environment can drive METE gene loss. metE7 provides a unique opportunity to study the physiology of a nascent B12 auxotroph. In the present work, the authors characterized the responses of metE7 to different vitamin B12 regimes and compared them with the responses of its ancestral B12-independent strain as well as those of a closely related, naturally B12-dependent alga Lobomonas rostrata. The authors demonstrate that B12 deprivation of metE7 disrupts C1 metabolism, causes an accumulation of starch and triacylglycerides, and leads to a decrease in photosynthetic pigments, proteins, and free amino acids. B12 deprivation also caused a substantial increase in ROS, which preceded rapid cell death. Further improvements in survival under B12 limitation and an increase in B12 use efficiency were found after metE7 underwent a further period of experimental evolution, this time in coculture with a B12-producing bacterium. Therefore, although an early B12-dependent alga would likely be poorly adapted to coping with B12 deprivation, association with B12-producers can ensure long-term survival while also providing a suitable environment for evolving mechanisms to tolerate B12 limitation better.

Small Secreted Peptides of a Model Legume: a Database 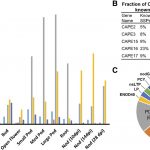 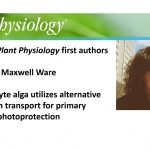