Recently, a novel class of noncoding RNAs named circular RNA (circRNA) has been shown to play roles in transcriptional regulation of gene expression in plants. However, a complete picture of circRNAome and their regulatory roles in controlling the stress response of plants was lacking. To address this, Zhang et al. have performed circRNA-seq and mRNA-seq of wild-type maize (B73) and Arabidopsis (Col) subjected to well-watered and drought-treated conditions. The analysis revealed the presence of 2174 and 1354 high-confidence circRNAs in maize and Arabidopsis, respectively, and the expression of circRNA-hosting genes was found to be significantly higher than the other coding genes. Correlating the expression of circular and linear transcripts in drought response showed similar variation patterns in maize and Arabidopsis suggesting the conserved molecular mechanisms governing drought response in plants. Investigating the effect of circRNAs on smallRNA (sRNA) in maize implicated a negative correlation between circRNA expression and sRNA accumulation. Further, overexpression of a circular RNA (circGORK) hosted by the GORK (Guard cell outward-rectifying K+-channel) gene in Arabidopsis indicated a positive role of circGORK in conferring drought tolerance. The data suggest that circGORK may influence the expression/splicing of its cognate linear transcripts. Altogether, the study delineates the involvement of circRNA in regulating drought stress response, and also, provides the framework for further research in the area of circRNA-mediated stress response. (Summary by Muthamilarasan Mehanathan) Plant J 10.1111/tpj.14267 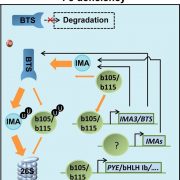 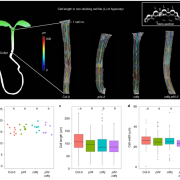 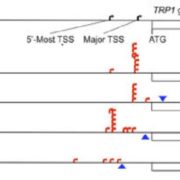 A Surprising Function for Gene Introns