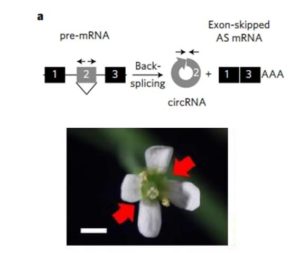 Circular RNAs (circRNAs) are a recently discovered form of stable, covalently-closed RNA found in all domains of eukaryotic life. The origins and functions of circRNAs have been under intensive investigation. Often, circRNAs consist of one or more exons, often corresponding to skipped exons from genes that are alternatively spliced (AS), but the relationship between circRNA and AS has been unclear. Conn et al. started with 12 abundant Arabidopsis circRNAs which they matched to their cognate genes, 11 of which showed exon skipping. They then focused on genes where the AS variant was known to have biological function. When they highly expressed a circRNA corresponding to exon 6 of SEP3, the resulting plants showed an increase in the exon 6-skipped AS variant, and a decrease in sepal number. The authors showed hybridization between the circRNA and the corresponding gene, and suggest that this interaction promotes the recruitment of splicing factors and the production of the AS variant. Nature Plants 10.1038/nplants.2017.53 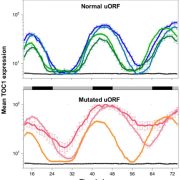 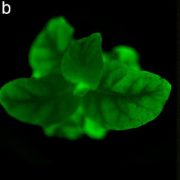 Non-random domain organization of the Arabidopsis genome at the nuclear per...