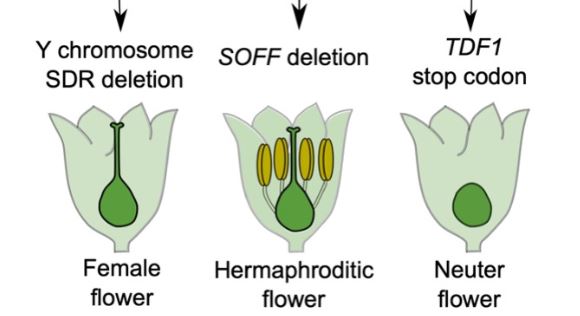 Contrary to animals, sex chromosomes in flowering plants (angiosperms) have evolved at least hundreds of times independently, providing an opportunity to unravel the mechanisms underlying their repeated evolution.

In the XY system, the Y chromosome dominantly confers male identity: XY individuals are males whereas XX are females. Possible models to explain the emergence of XY chromosomes from a pair of autosomes include a one- and a two-gene model. In the two-gene model, male-promoting and female-suppressing functions are split in two linked but distinct genes of the Y chromosome, whereas a single gene carries both functions in the one-gene model (Charlesworth, 2018).

In spite of significant progress using classic models Papaya and Silene, identifying sex-determining genes and testing underlying models for their evolution has remained difficult. A major challenge is to obtain an accurate and complete sequence of the sex chromosomes, which often undergo complex rearrangements as a result of loss of recombination during meiosis. Kiwifruit (genus Actinidia) and garden asparagus (Asparagus officinalis) have emerged as attractive models for sex chromosome evolution studies. Whereas the kiwifruit genus is mostly dioecious, garden asparagus is a recently evolved dioecious (plants with separate sex) species. In both species, the X and Y are homomorphic (they cannot be easily distinguished by morphology alone in cytology), suggesting a relatively recent origin. Previous efforts have capitalized on improvements in genomic sequencing read length to generate high quality assemblies of the X and Y chromosomes in kiwifruit, and of the Y chromosome in garden asparagus (Akagi et al., 2018; Harkess et al., 2017).

Functional studies have enabled the identification of non-recombining sex-determining regions (S-DR) on the Y in both systems. In kiwifruit, Shy Girl (SyGI) and Friendly Boy (FrBy) on the Y S-DR were identified as the female suppressing and male promoting genes respectively, thus validating the two-gene model. SyGI encodes a negative regulator of cytokinin response that represses pistil growth (Akagi et al., 2018). FrBy encodes a putative orthologue of the membrane bound protein MTR1, which in rice and Arabidopsis is required for tapetum function, a tissue that is essential for male gametogenesis and fertility (Tan et al., 2012; Akagi et al., 2019).

To identify sex determining genes in garden asparagus, Harkess and colleagues (Harkess et al., 2017) previously conducted a genetic screen for male-to-hermaphrodite conversion mutants and identified SUPPRESSOR OF FEMALE FUNCTION (SOFF). SOFF is located in the 1Mb sex-determining region (S-DR) of the Y chromosome and encodes an unknown protein characterized by a Domain of Unknown Function (DUF247). Further analysis of the genes contained in the S-DR revealed the presence of the asparagus orthologue of the MYB transcription factor TAPETUM DEFECTIVE FUNCTION 1 (aspTDF1). TDF1 is essential for male fertility in Arabidopsis, and like FrBy, functions in the tapetum (Zhu et al., 2008). These results strongly supported the two-gene model in garden asparagus, but the identity of the male promoting gene remained to be demonstrated. 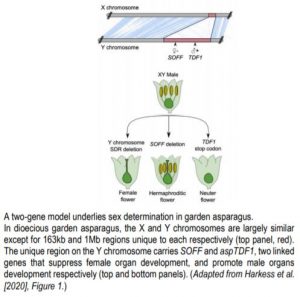 Now Harkess et al. (2020) reveal aspTDF1 as the Y-specific gene that promotes male function and which, along with SOFF, determines sex identity in garden asparagus. The authors performed EMS mutagenesis to induce point mutations and conducted a genetic screen for male-to-neuter conversion mutants. Neuter plants produce flowers that develop neither male nor female organs (see Figure). Sequencing aspTDF1 in a mutant obtained from the screen revealed a point mutation leading to a premature stop codon. The authors also found that similarly to Arabidopsis, aspTDF1 was expressed in the tapetum in garden asparagus, suggesting a conserved function. Furthermore, the team used long read optical mapping and PacBio DNA sequencing from a doubled haploid XX female plant to generate a high-quality assembly of garden asparagus X chromosome. Comparing X and Y chromosomes identified a 163kb region on the X that is absent from the Y. The high co-linearity of the flanking regions suggests that hemizygosity between the X and the Y unique regions, rather than extensive rearrangements, underlies reduced recombination (see Figure). This is also consistent with the young age of these chromosomes.

Harkess, A. et al. (2017). The asparagus genome sheds light on the origin and evolution of a young Y chromosome. Nature Communications 8: 1–10. 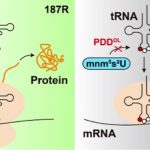