Climate change is expected to make drought far more severe and frequent for plants all over the world (Bartlett et al., 2016). Drought affects yield, growth, and development of plants.  Photosynthesis is particularly sensitive to drought stress, and when its efficiency decreases due to drought, the excess absorbed light energy causes photodamage and photoinhibition in the photosynthetic electron transport chain (Pinheiro and Chaves, 2011).

Photosystem II (PSII) is a thylakoid-membrane integral protein complex of the electron transport chain that particularly is sensitive to photodamage under drought. PSII has a core that is conserved from cyanobacteria to vascular plants (Nickelsen and Rengstl, 2013), so studies in cyanobacteria should be directly applicable to crops. A crucial process in the function of PSII is the replacement of damaged proteins, especially D1, which is the core component of PSII reaction center. Molecular chaperones such as Heat shock protein (Hsp) 70 and Hsp40 guide this process (Hartl and Hayer-Hartl, 2009). Deletion of these proteins or their cyanobacterial homologs DnaK and DnaJ, respectively, results in reduced photosynthetic efficiency in plants, whereas overexpression slows the degradation of oxygen evolving complex proteins (Chen et al., 2010).

In this issue of Plant Physiology  Xu et al., 2020 provide an in depth molecular analysis of DnaJ-DnaK proteins and their role in PSII  repair in N. flagelliforme. BLAST searches revealed four DnaK and eleven DnaJ proteins encoded in the genome of N. flagelliforme, of which NfDnaK2 and NfDnaJ9 have higher expression during dehydration and, conversely, lower expression during rehydration. These two proteins interact with each other, as shown by Yeast 2-hybrid (Y2H) and pull-down assays.  Pull-down assays revealed that NfDnaJ9 also interacts with NfFtsH2; FtsH proteases are ATP-dependent zinc metalloprotease involved in the turnover of the D1 protein during the PSII repair cycle. This finding suggested that NfDnaJ9 and NfFtsH2 could play a role in PSII protection during dehydration. The authors tested this hypothesis by transforming the model cyanobacterium Nostoc sp. PCC 7120 with NfDnaK2, which led to enhanced PSII activity compared to the WT strain, as assessed by both Fv/Fm and oxygen evolution rates. Additionally, after high light exposure, the D1 protein turned over much faster in the transgenic strain, which also showed higher levels of FtsH compared to WT. Furthermore, the transgenic strain grew 25% better than the WT in the presence of polyethylene glycol (PEG) and sorbitol, which create water deficit, mimicking drought conditions.

Regulatory elements controlling the expression of the NfdnaK2 gene were identified by fusing putative promoters to luminescent reporter gene luxAB in Nostoc sp. PCC 7120. NfRre1 and NfPedR were identified in the screen due to their luxAB expression and bioluminescence under dehydration.  Electrophoretic mobility shift assays determined that these factors might physically bind to the NfdnaK2 promoter. Previous transcriptomic analysis had already shown that both NfRre1 and NfPedR are upregulated during dehydration, just like NfdnaK2, which suggest that they behave as positive regulators.

In summary, DnaJ-DnaK proteins in N. flagelliforme are upregulated under dehydration conditions and play an important role in the response to drought-like stress. By promoting D1 protein turnover in association with the NfFtsH2 protease, DnaJ-DnaK proteins obviate the energy-intensive reconstruction of the PSII machinery during rehydration conditions (Klotz et al., 2016). The highly conserved transcription factors NfRre1 and NfPedR likely bind to the cis-acting promoter element of NfdnaK2, thus positively regulating its expression under water deficit conditions. This paper (Xu et al., 2020) thus provides direct evidence of a link between DnaJ-DnaK proteins and D1 protein turnover in cyanobacteria. This work improves the current understanding of drought tolerance mechanism in plants. 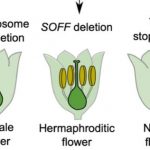 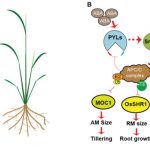