In addition to promoting plant growth and development, the colonization of roots by beneficial microorganisms often provides aboveground tissues with enhanced resistance to pathogen attack. This form of resistance, referred to as ‘induced systemic resistance’ (ISR), relies on the long-distance movement of root-derived signals that travel through the vasculature to access and prime defenses in aerial plant organs (Pieterse et al., 2014).

The growth-promoting fungus Trichoderma virens is a potent activator of ISR in several angiosperms. In the monocot Zea mays (maize), the ability to manifest ISR relies on secreted fungal proteins that modulate host oxylipin biosynthesis (Djonović et al., 2007; Constantino et al., 2013). In particular, the 9-lipoxygenase LOX3 has emerged as a negative regulator of ISR, such that lox3 mutants exhibit constitutive resistance to foliar pathogens and xylem-sap collected from these plants is sufficient to induce ISR in wild-type receiver plants (Constantino et al., 2013). 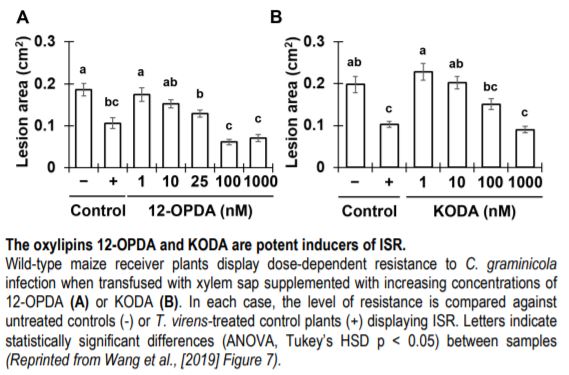 The contrasting ISR phenotypes of Tv-Δsm1/Tv-Δsir1 and maize lipoxygenase mutants facilitated comparative analytical studies aimed at identifying oxylipin ISR signals in xylem sap. To this end, the authors identified two xylem-mobile oxylipins that were strongly associated with ISR; the jasmonic acid (JA) precursor 12-oxo-phytodienoic acid (12-OPDA) and an ⍺-ketol of octadecadienoic acid (KODA). Importantly, both 12-OPDA and KODA provided enhanced resistance to C. graminicola in a dose-dependent manner when transfused with xylem sap collected from untreated maize (See Figure). Moreover, 12-OPDA restored ISR activity in plants colonized by Tv-Δsm1 and in lox10 mutants, supporting the idea that 12-OPDA is a critical signal for long-distance ISR signaling in maize.

Since 12-OPDA is a precursor of the defense hormone jasmonic acid (JA), the authors investigated the relevance of bioactive jasmonic acid-isoleucine (JA-Ile) during ISR in maize. Phenotypic analysis of the JA-deficient opr7 opr8 double mutant demonstrated that JA itself was dispensable for ISR. Moreover, increasing doses of JA-Ile led to enhanced susceptibility when transfused with maize xylem sap. Collectively, the data suggested that the accumulation of 12-OPDA rather than JA-Ile is required for the establishment of T. virens­-induced ISR in maize. In support of this idea, transcriptome analysis of maize plants undergoing ISR revealed that 12-OPDA and KODA biosynthesis genes were induced upon T. virens colonization, whereas JA-related genes were ultimately repressed. Together, the data illustrate a directed effort to accumulate the mobile-oxylipin signals 12-OPDA and KODA during ISR. Further efforts to understand the contribution of these oxylipins to ISR in maize and other angiosperms will provide fundamental insight into long-distance immune signaling activated by beneficial interactions with rhizosphere microbes.