Improvement of crops using traditional breeding is too slow to ensure food production able to sustain the growing human population, especially in the face of climate change (Hickey et al., 2019). Transformation methods for monocot crops depend on the availability of immature embryos and are effective only for a limited number of genotypes, oftentimes eliminating the most productive elite varieties, which are recalcitrant to transformation. Lowe et al. (2016) recently addressed the above issues by equipping a vector for DNA delivery with the embryogenesis-inducing genes Wuschel (WUS) and Baby Boom (Bbm). Expression of WUS and Bbm in the positive transformants promoted callus regeneration, thereby increasing the recovery rate and widening the range of cultivars available for transformation.

In the current issue of Plant Physiology, Zhang et al., (2019) introduce a new system that employs WUS and Bbm for efficient delivery of CRISPR/Cas9 in maize. Zhang et al. constructed a ternary vector system, carrying maize WUS2 and Bbm genes, two glyphosate-resistance genes (GAT and CP4EPSPS) and Cre/lox module. The Cre/lox module is driven by a drought-inducible promoter (Rab17), which ensures that the cassette containing the morphogenesis regulators (WUS2 and Bbm) are removed upon desiccation treatment of the developing callus. The transformation efficiency for the plants transfected with the morphogenesis regulators increased from 20 to 60%, compared to the vectors without the WUS2 and Bbm genes. The efficiency of gene-editing with these vectors carrying a single guide RNA (gRNA) was similar to the traditional vector, but the increased transformation efficiency of the vector carrying morphogenic regulators resulted in an overall higher success rate.

Oftentimes the availability of new methods is restricted by the limited availability of the resources; however, the tools developed by Zhang et al. (2019) are available in public repositories (Addgene and Molecular Cloud), and the gRNA can be exchanged in a jiffy using a one-step Gateway reaction. The method developed by Zhang et al. (2019) illustrates that combining tissue dedifferentiation with compatible vectors can unlock a higher transformation efficiency, releasing the restrictions on the transformation of obstinate maize inbred lines like ND88, which can now be successfully transformed. This work further confirms that driving transformed tissue to quasi-embryonic state provides important contribution to the gains of the transformation efficiency. 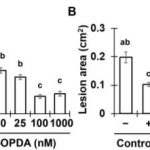 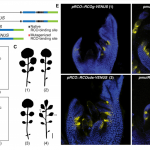 Autoregulation of RCO by low-affinity binding modulates cytokinin action and...
Scroll to top