Nidhi Sharma is a researcher in Dominique Bergmann’s lab at Stanford University. She graduated from The University of Texas at Austin and did post-doctoral work with Dr. Kathy Barton at Carnegie Institution of Science. Other than plants, she is passionate about traveling and crafting.

Sridhar Gutam currently working as scientist at the ICAR-Indian Institute of Horticultural Research, Bengaluru, India as Plant Physiologist. His interests are phenology of fruit tree crops and open access to agricultural data and information. 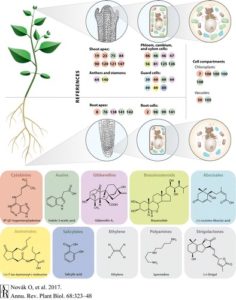 Throughout plant life cycle, from germination till reproduction, every event is regulated by a highly complex network of hormones. Unlike animals where hormones are synthesized in specific glands, each plant cell is able to produce hormones. However, hormones are synthesized in specific organs in plants. Recent advancements in tools have enabled plant scientists to study distribution profiles of phytohormones in plants. Read more about these cool tools in this review by Novák et al. (Summary by Nidhi Sharma) Annu. Rev. Plant Biol. 10.1146/annurev-arplant-042916-040812 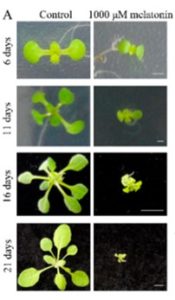 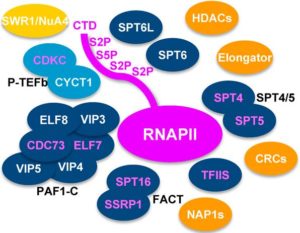 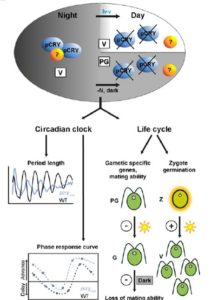 The effects of climate change on agriculture to human health have been well discussed in both scientific and public domains. In plants, changes in climate might affect interactions between the plants and their insect pollinators due to variable availability of pollinators in severe weather conditions, thus affecting reproductive success of plants and crop yield. In this paper, Bishop et al investigate how plant–pollinator interactions are modified by extreme weather by subjecting faba bean (Vicia faba) to altered temperature. Read the paper to see how they quantified pollen movement between plants using a unique phenotypic marker. (Summary by Nidhi Sharma) J. Exp. Bot. 10.1093/jxb/erw430 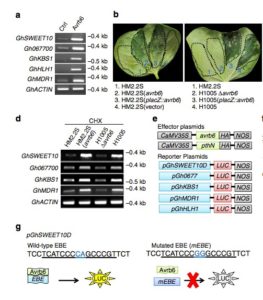 Plants undergo photosynthesis in leaves to produce carbohydrates sucrose and starch. The sucrose is transported to other parts of the plants via sugar transporters called SWEET proteins. In addition, certain plant pathogens activate SWEET genes to invade their host. As shown in this paper, during bacterial blight of cotton (BBC) disease, in cotton GhSWEET10 is induced by Transcription activator-like (TAL) Avrb6 from Xanthomonas citri subsp. malvacearum (Xcm). Understanding this mechanism of infection during BBC would help us develop pathogen resistant varieties of cotton. (Summary by Nidhi Sharma) Nature Comms. 10.1038/ncomms15588 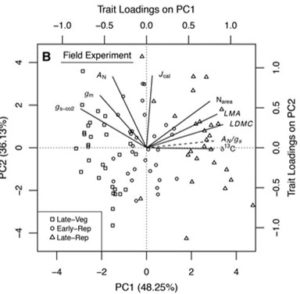 An experimental study by Tomeo and Rosenthal with soybean cultivars  demonstrated that there exists genotypic differences in mesophyll conductance (gm),  and that the potential exploitation of this trait may increase crop productivity. It was found that there exists a proper coordination mechanism between  gm and the physiology of leaf photosynthesis. The gm which alters the CO2 concentration in the leaf photosynthesis apparatus was found to be independent of water loss from the leaf and the exploitation of this trait in selecting genotypes which have higher gm will help in developing improved productive and climate resilient varieties. (Summary by Sridhar Gutam) Plant Physiol. 10.​1104/​pp.​16.​01940 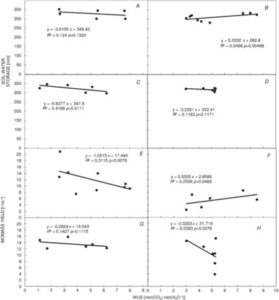 Podlaski et al. conducted experiments with energy crops like miscanthus, prairie cordgrass, willow, etc, and report that  water use efficiency (WUE) is no longer a valid trait for selecting energy crops for drought tolerance. They could not find any significant relationship  between  WUE  and  biomass  yield. However, they found a positive correlation between  soil water storage and the biomass  yield, and the response was highly differentiated among the crops under various vegetation seasons. (Summary by Sridhar Gutam)  Photosynthetica 10.1007/s11099-017-0697-0 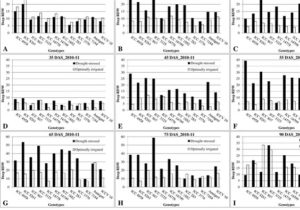 This study by Ramamoorthy et al. showed that survival of plants under drought conditions is not a sufficient goal for breeding. Rather,  yield for biomass and food production under water deficit is a better target. Chickpea genotypes having better root growth and higher root density showed better grain filling, and produced good yields in these studies.  Some of the genotypes showed proper grain filling with better partition of photosynthates because of higher root density at deeper layers and higher root length at surface. (Summary by Sridhar Gutam)  Field Crops Res. 10.1016/j.fcr.2016.11.004 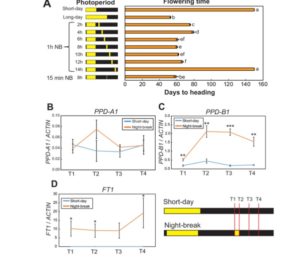 In order to address the knowledge gap in the mechanisms of photoperiodic induction of flowering by phytochrome, Pearce et al. studied flowering behavior in wheat grown under short days, with the interruption of the long nights by short pluses of light (night breaks). Their study showed that night breaks accelerate flowering, and also demonstrated that the response is mediated by photoperiod and phytochrome and requires both PHYB and PHYC. Night breaks affect the expression of PHOTOPERIOD1 (PPD1), which affects the expression of the flowering promoter FT1. (Summary by Sridhar Gutam) Plant Physiol. 10.​1104/​pp.​17.​00361 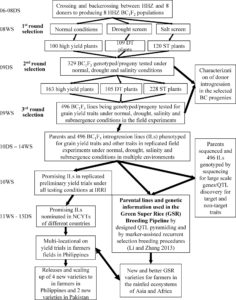 Ali et al. describe a rice breeding strategy to improve abiotic stress tolerance as well as to accelerate the speed to achieving homozygosity. The researchers named this particular technique as “Green Super Rice” (GSR) breeding technology. They use a backcross (BC) breeding approach to fix breeding lines which are tolerant of multiple abiotic stresses and also perform well under normal irrigated conditions to generate large set of improved and tolerant lines to abiotic and biotic stresses (introgression lines). Data from several lines grown in the field are described. (Summary by Sridhar Gutam)  PLoS One. 10.1371/journal.pone.0172515

For the remainder of June and July, several Plantae Fellows will take turns editing the What We’re Reading series. The Plantae Fellows were selected for their interest in communicating science, and they are looking forward to wearing the Editor hat and sharing their selections with you in the coming weeks. (Note – if you are interested in applying to be a 2017-2018 Plantae Fellow, we will be issuing an application call in the next few days. Watch this space!)