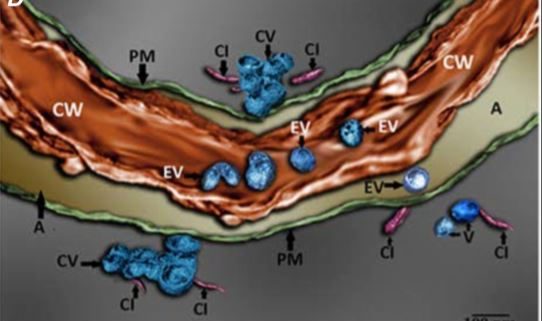 Positive strand (+) RNA viruses act as their own messengers, encoding an RNA-dependent RNA polymerase that can replicate their sense RNA genome. This allows (+)RNA viruses to replicate outside the nucleus, within replication complexes formed from host organelle membranes often called “replication factories” (Laliberte and Zheng, 2014; Romero-Brey and Bartenschlager, 2014; Shulla and Randall, 2016). Replication complexes of the plant (+) RNA virus Turnip mosaic virus (TuMV) are derived from higher order vesiculation of ER membranes and formation of multivesicular bodies (MVBs), which contain numerous virus-containing intraluminal vesicles (Grangeon et al., 2013; Wan et al., 2015). TuMV vesicles and MVBs can move from cell to cell through plasmodesmata, and aggregated replication factories have been found in the xylem of infected plants, with both routes contributing to the spread of the virus within the plant (Grangeon et al., 2013; Wan et al., 2015; Wan and Laliberté, 2015).

Through investigating host cell factors involved in the maturation of TuMV replication complexes, a MVB-localized SNARE (Soluble NSF Attachment protein Receptor) protein, Vti11 (Vps10(ten) interacting protein 11), was shown to play a critical role in TuMV replication and systemic infection in Arabidopsis thaliana (Cabanillas et al., 2018). This same SNARE was also found within the proteome of extracellular vesicles (EVs) isolated from Arabidopsis. In eukaryotic cells EVs are derived from several sources, including apoptotic bodies formed via blebbing from the cell during programmed cell death, microsomes formed from plasma membrane vesiculation, and exosomes, which are derived from MVB intraluminal vesicles that are released upon fusion of the MVB boundary membrane with the plasma membrane (Rutter and Innes, 2018). Given its localization to MVBs, Vti11 likely also functions in exosome biogenesis by mediating fusion of MVBs with the plasma membrane. The dual functions of Vti11 in TuMV infection and MVB-plasma membrane fusion potentially hint toward an extracellular location for viral vesicles through fusion of TuMV MVBs with the plasma membrane. This would represent a novel pathway for intercellular movement of plant viruses.

In this issue of Plant Physiology, Mohaved et al. (2019) set out to investigate the possible existence of TuMV replication complexes in the extracellular space. Nicotiana benthamiana leaves were agroinfiltrated with an infectious cDNA version of TuMV that expresses the membrane-bound viral protein 6K2 fused to GFP. Confocal microscopy revealed 6K2-positive aggregates that localized to the extracellular space, delineated by the FM4-64-stained plasma membrane (Figure 1A). A closer look using transmission electron microscopy (TEM) showed that MVB-plasma membrane fusion events occurred at significantly higher levels in infected leaves, and the number of vesicles present in the extracellular space was also significantly higher in infected leaves. Immunogold labeling of double-stranded RNA (dsRNA), which should be present within viral replication complexes, demonstrated that EVs, as well as MVBs that could be observed fusing with the plasma membrane, contained dsRNA (Figure 1B). These observations are consistent with labelled EVs representing TuMV replication complexes that are derived from viral MVB fusion with the plasma membrane. 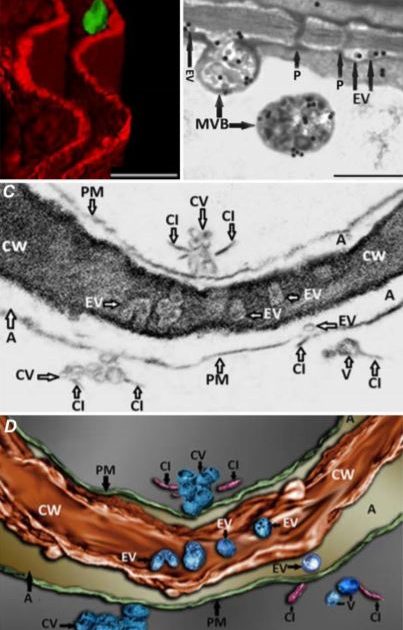 It was also apparent from TEM images that viral EVs may exist within the cell wall, although this is difficult to clearly discern from two-dimensional TEM images due to the high electron density of the cell wall. The authors used focused ion beam–extreme high-resolution scanning electron microscopy (FIB–EHRSEM) to obtain more precise structural details of the cell wall and any associated vesicles in infected cells. This technique uses a focused ion beam to section the sample while images are collected using scanning electron microscopy (SEM) (Figure 1C). Images of 250 slices of 7nm each were used to construct a 3D rendered image of a TuMV-infected cell, specifically focusing on the extracellular region. The reconstruction clearly shows several spherical EVs within the cell wall (Figure 1D), suggesting that TuMV EVs are able to penetrate and likely cross the cell wall. This is the first evidence to suggest the existence of replication complexes within the extracellular space and cell wall, and suggests a novel mechanism for viral cell-to-cell spread. Given the similarities in replication mechanisms with other (+) RNA viruses that infect a wide diversity of hosts, from economically important crop plants to humans and other animals (Ahlquist et al., 2003; Laliberte and Zheng, 2014), this may represent an important common pathway for other (+) RNA virus replication and spread.

Relative to humans and other higher vertebrates, less is known about exosomes in plants, although recent advances in isolating plant EVs have led to a greater understanding of their physiological importance (Rutter and Innes, 2017, 2018; Rybak and Robatzek, 2019). In plants, EVs are known to contain antimicrobial compounds and defense-related proteins, and participate in localized immune responses to invading fungal and bacterial pathogens (Rutter and Innes, 2018). In the current study (Mohaved et al., 2019) the proteome of infected N. benthamiana and Arabidopsis EVs was investigated using improved EV isolation methods (Rutter and Innes, 2017). Among those host proteins found exclusively in EVs of infected plants, several were identified that are known to be involved in TuMV replication, as well as enzymes involved in lipid and secondary metabolism biosynthesis pathways. Several additional host proteins whose involvement in TuMV infection is not yet characterized were also observed, and should be promising candidates for further investigation. These exciting data pave the way for future studies aimed at understanding how exosomes contribute to systemic viral infection in plants and other organisms. TuMV EV biogenesis may also serve as a model system for further discovery of the molecular players involved in this vesicle transport pathway in plants.

MVApp flies its flag to the challenging frontier of multivariate data analy... 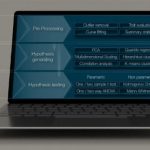 What is lignin made of? New components discovered!
Scroll to top