Lignin is a class of complex aromatic polymers particularly important in the formation of cell walls, especially in wood and bark. Lignin contributes to plant structure, support and defence against pests and pathogens, but also is an exciting and renewable polymer with a wide range of opportunities for biotechnology (Ralph et al., 2019).

The chemical composition of lignin varies from species to species, but lignin is traditionally considered to be formed from the oxidative coupling of three monolignols: p-coumaryl, coniferyl, and sinapyl alcohols (Boerjan et al., 2003; Ralph et al., 2004). Recently, new monolignols derived from other biosynthetic pathways have been shown to be incorporated into lignin, including tricine and the hydroxystilbenes piceatannol, resveratrol, and isorhapontigenin (del Río et al., 2012; 2017; 2018).

In this issue of Plant Physiology, Rencoret et al. (2019) report that hydroxystilbene glucosides are also genuine lignin monomers that participate in coupling and cross-linking reactions. Through derivatization followed by reductive cleavage (DFRC) of Picea abies bark lignin, the authors found three new hydroxystilbene glucosides: isorhapontin, astringin and piceid, the latter two at lower levels. These three monomers were previously known as components of Picea abies extracts. However, the deep and various extractions performed by the authors excluded the possibilities that these monomers are solely lignin contaminants. Furthermore, via 2D-HSQC-NMR and Diffusion Ordered Spectroscopy (1D-DOSY) Rencoret and co-workers obtained additional information regarding the lignin composition and structure, along with information on the way with which these hydroxystilbene glucosides are incorporated into the lignin polymer.

This work represents the first example of the authenticated incorporation of phenolic glycosides into lignin. In fact, in principle a phenol protected with a glucoside cannot be oxidized to a radical and therefore cannot participate in lignification. Rencoret and co-workers proposed an elegant explanation for their discovery: these novel monomers have another phenolic-OH that participates in radical coupling, taking over this function from the glucosylated phenolic group usually involved in these bonds. However, additional work is needed to confirm this hypothesis.

In conclusion, Rencoret et al. (2019) found the hydroxystilbene glucosides as novel lignin monomers in P. abies bark and envisage that their introduction into the lignin polymer of other species via metabolic engineering could confer disease resistance via strengthening of the cell wall and could improve enzymatic wall digestibility by enhancing hydrophilicity.

Viruses on the move in the extracellular space 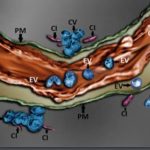 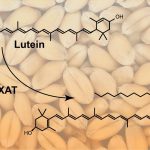