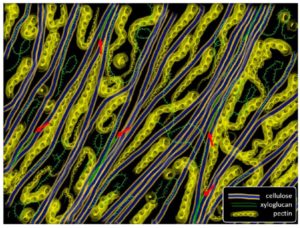 The primary wall of a growing cell is a versatile, subtle and dynamic structure, with unique properties and functions in the life of the plant (Burton et al., 2010). When a cell grows, its wall stretches irreversibly as the cell enlarges in volume. Cells can start and stop this process quickly, in less than a minute in some cases, revealing that the molecular processes underlying irreversible wall expansion are dynamically controlled. Such dynamic behavior may be mediated, at least in part, by changes in wall pH (Hager, 2003; Barbez et al., 2017), which modulates the wall-loosening action of expansins (Cosgrove, 2015) and potentially other wall-modifying agents. Wall pH in turn is dynamically modulated by plasma membrane H+-ATPase activity (Haruta et al., 2014; Haruta et al., 2015) and other processes in the wall. Because growing cell walls are thin and in close physical contact with plasma membranes, wall pH can be rapidly modulated (Bibikova et al., 1998; Monshausen et al., 2007; Barbez et al., 2017). As a result of the pH-dependent activity of expansins, the growing cell wall behaves like a ‘smart material’ – one whose properties (extensibility in this case) reversibly and rapidly change with environment (e.g. pH). Slower changes in wall structure that influence the wall’s ability to expand also occur as part of the natural course of cell development, e.g. as cells are displaced through the elongation zone of a stem (Phyo et al., 2017), or in response to external perturbations, e.g. Sahaf and Sharon (2016). These slower changes may include changes in mechanics, such as wall stiffening, and in the density or accessibility of sites where expansins or other proteins can loosen the wall.