Even moderate droughts can greatly limit plant performance and reduce agricultural yield. Plants have evolved a wide range of traits to acclimate to drought (Yordanov et al., 2000), and enhancing these traits could improve drought tolerance in crops. One promising trait is the formation of the so-called ‘rhizosheath’ under drought. The rhizosheath is the soil that remains strongly attached to the root upon excavation. This protective layer enhances water and nutrient uptake by maintaining direct contact between the root and the soil (Brown et al., 2017). Rhizosheath formation occurs on the roots of many but not all angiosperms and is associated with several factors, including: root hairs, root and microbial mucilage, and the surrounding microorganisms (Brown et al., 2017). Rhizosheath production is enhanced by drought, but the mechanism by which this occurs remains elusive.

Zhang et al. (2020) also analyzed the bacterial composition of the rhizosheath and found that drought led to an enrichment of plant growth-promoting Enterobacteriaceae rhizobacteria. The authors isolated several bacterial strains and found that many Enterobacteriaceae bacteria showed high 1-aminocyclopropane-1-carboxylic acid (ACC) deaminase activity. Since ACC is a precursor of ethylene, ACC deaminase-containing bacteria can reduce ethylene-mediated plant responses and promote growth during environmental stress (Ravanbakhsh et al., 2017). Interestingly, this high ACC deaminase activity of the rhizosheath Enterobacteriaceae bacteria appears to be at odds with the observed enhanced ethylene signaling in the roots. However, inoculation of dry soils with wild type Enterobacter aerogenes resulted in increased rhizosheath formation while inoculation with an ACC deaminase-deficient mutant strain did not (Zhang et al., 2020). The authors thereby confirmed that the ACC deaminase activity is indeed crucial for enhanced rhizosheath formation during drought.

Sharp RE (2002) Interaction with ethylene: Changing views on the role of abscisic acid in root and shoot growth responses to water stress. Plant, Cell Environ 25: 211–222 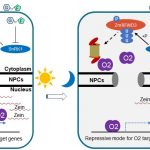 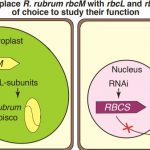 Back to where it came from: chloroplast expression of both Rubisco subunits...
Scroll to top