The unfolded protein response (UPR) is a cellular stress response involving the endoplasmic reticulum (ER). The UPR is activated in response to an accumulation of unfolded or misfolded proteins in the lumen   of the ER.  However, ER stress can also be induced in the absence of external stressors, such as under certain physiological or developmental conditions in which the demand for protein folding 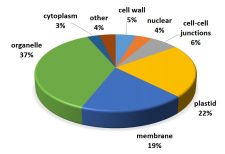 exceeds the capacity of the folding machinery. For example, during reproduction, the UPR is provoked by the heavy demand in the anther tapetal cells to synthesize and secrete materials comprising the pollen coat. Multiple factors act in the UPR, including 1.) the membrane-associated transcription factor, BASIC LEUCINE ZIPPER 17 (bZIP17), which is mobilized to the nucleus in response to stress, and 2.) the membrane-associated RNA splicing factor, INOSITOL REQUIRING ENZYME1 (IRE1). Given that the UPR is generally regarded as a stress response, it is surprising that a previous study of the Arabidopsis ire1a ire1b bzip17 triple mutant exhibited defects not only in in stress signaling but also in vegetative plant growth under non-stressful conditions. This raises the possibility that the UPR functions in plant development in the same manner as it does in responding to stress. By studying a mobilization-defective bZIP17 mutant, Bao et al. (10.1104/pp.18.01261) have found that for normal plant development to occur, bZIP17 must be capable of mobilization. These findings are consistent with the hypothesis that the UPR contributes to normal development in Arabidopsis by operating at low levels or in limited tissues in much the same manner as it does in responding to ER stress.